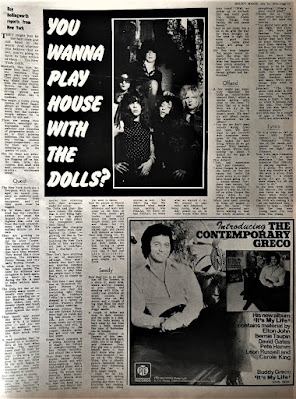 This is the story of the last rock and roll band. The New York Dolls. There won't be another. They are the last of propellor aircraft. What follows will mean nowt.

For the Dolls… Well, I would travel to Sydney, Australia — for they are the remnants of what it was all about.

Holiday Inn, Atlanta, Georgia. Clarissa was 19 when she first saw the New York Dolls. That was last night at Richards, Atlanta. Now she is 27, and knows everything about everything.

"They were like taking a legal drug man. I thought rock and roll was the Allman Brothers. It ain't. It's the New York Dolls."

After breakfast, and a cup of Chivas Regal whiskey which spread the tongue like acid, I wandered to the hotel bar.

"Because moles were banned from Lancashire in 1887 by Henry Plimsoll of Derby, who also invented white painted lines to put around the hulks of ships so they would not sink under the weight of slaves."

Ah! Slaves. Georgia. Where the main percentage of people who serve upon other people are Black. Some civil war!

"I want a slave" said David JoHansen, lead drinker of the Dolls.

Happy 'cause I just danced my thighs three inches thinner for the Dolls.

You know, my chums, this band makes Alice Cooper looks like the Bronte Sisters.

In other words, they are awful — in the truest and most beautiful sense of the word. Johnny Thunders left the stage in Chicago the other night and retched into the dressing room table of flowers. Now that is rock and roll.

Audience seated sipping large drinks of vodka, mixed with pills and other luxuries.

"The critics really bombed us in Chicago," said David Jo Hansen, lead singer. "But we love criticism. We're not just masochistic about being put down. We're something else."

Lights on. Arthur Kane, bassist, mild as the very finest washing up liquid, stands. Arthur. Blond. He looks like a mutated Marlene Deitrich. But he plugs in and goes blmmm... blmmm... blmmm...

Sylvain Sylvain plays just one bloody chord and the blood runs. And that club moves.

Jo Hansen singing like a newspaper seller. He rips his shirt open and there is a white waistcoat and skin, and he bites the top off a bottle of California wine, and drinks it down, froth, bubbles and all.

And then he sucks the bottle. "WOW" say the girls close to the stage.

But I thought we were all singer songwriters now? I thought rock and roll was over? I thought when John Lennon sang 'All I Want Is The Truth' that it was the end and we'd all start singing Tom Paxton numbers again?

But nay. Here on this stage battles a baggage of balls and trousers and high-heeled shoes; and drunkeness and unwashed hair; and untuned guitars and songs that musicians would call a mess.

But a rock and roll child would say "God Bless You — You are so necessary!"

Rock and roll is sex. And the Dolls played on. And they played sex. Non-stop.

They scratched and broke picks and played licks that were sick and copied and had been played before. But never like this! Never like the Dolls played it.

And then there was the lovely looking lady who shook her lips and danced 'Personality Crisis'.

She dances, and falls, and the guys around her laugh. It wasn't funny. I picked her up. The Dolls jive on. Jive like there was never, ever again to be a tomorrow. And in this case there wasn't.

My head aches, with enjoyment. 12-bar boogie, chords struck like a lumberjack struck a tree. Who are we?

They — the Georgia State Police — put 48 bullets in that robber. And when his body started to fall apart they stopped shooting. We heard the shooting. We saw the body.

Ever and anon, like a cigarette smoker takes a cigarette to his lips, we went back and danced to The Dolls. The Dolls. Now a pigsty of sweaty smell and stale alcohol. But they still play.

No! No messages. No instructions through song! Nothing to think about. Nothing to admire. Few words rhyme, or for that matter mean anything.

But when spewed by David Jo Hansen — then they are rock and roll. No! No protest songs that mean anything. Just... Just... Protest.

The hottest thing I've seen. Hotter than 12 pokers thrust in your eyes. Hotter than Marlene Dietrich — is the New York Dolls.

Who was Roy Hollingworth, apart from being the first writer on either side of the Atlantic to claim huge things for The New York Dolls?

Richard Williams, his colleague at Melody Maker, in an obituary, pegs him rightly as Nick Kent before Nick Kent:

Several years before a group of New Musical Express staff writers began presenting themselves to their readers in the guise of auxiliary members of rock bands, the Melody Maker's Roy Hollingworth became the first English rock critic to look and behave in a way that made him indistinguishable from the musicians who peopled his articles.

Lesser writers adopting such a strategy often made themselves appear fools. But Hollingworth, who has died aged 52, was one of the most colourful and engaging writers employed by the pop music press in the early 1970s. His reviews conveyed a love of the music, while his interviews with the people who made it were often amusing and usually sympathetic to the characters who crossed his path.

Like many writers of that era, he saw his task as one of spreading enthusiasm for music that caught his imagination, and did it with flair. If a more urgent mission to become a rock star himself was less successful, despite occupying significant parts of the past 30 years, undoubtedly he saw it as a more fruitful way of spending his time.

I met Hollingworth in 1965, when we were both in our teens and attending a day-release course in various journalistic skills. Born in Derby, he was educated at Henry Cavendish grammar school.

We were junior newspaper reporters: his the Derby Evening Telegraph, mine the Nottingham Evening Post. When matters involving shorthand, the law for journalists and other elements of tradecraft had been dealt with, it was time to settle down in a coffee bar and discuss the latest visits to the east Midlands of the Who or Jimi Hendrix. Before long, both of us were pestering our editors to allow us space to write about such events.

Early in 1970 we were reunited at the Melody Maker, where half a dozen writers had been engaged by the editor, Ray Coleman, to replace defectors who had left to form a rival weekly, Sounds. The new talent helped boost the paper's circulation to the brink of 200,000 copies during the next few years, and Hollingworth became one of the paper's most distinctive and influential contributors.

An instinctive affinity for a life of hanging out until the early hours at the Speakeasy or the Revolution and of going on the road with bands across Europe and America eased his entry into London's rock society. For a while he and the MM's gifted photographer, Barrie Wentzell, shared a flat above a Soho pizza restaurant. Their convivial instincts and the flat's location, a few steps away from such musicians' hangouts as the Nellie Dean, the Ship, La Chasse and the Marquee, meant that it became a rendezvous for a bunch of rock eccentrics, notably Viv Stanshall and Legs Larry Smith of the Bonzo Dog Doo-Dah Band.

A posting to the Melody Maker's New York office broadened Hollingworth's friendships; it also increased his carousing, in a way that did him few favours in the longer term.

His tastes reflected his personality. The English whimsy to be found in the work of Syd Barrett and Marc Bolan appealed to his slightly fey, hippie-ish side, while the south Wales band Man, and the Irish blues guitarist Rory Gallagher satisfied a fond ness for unpretentious blue-collar boogie. And his writing, which was loose-jointed, warm-blooded and sometimes joyously surrealistic, in turn reflected the music.

He also cherished the moodier type of singer-songwriter, whose ranks he aspired to join. Leonard Cohen was a particular hero, and during an often-quoted interview in 1973, having discussed the manifold faults and wickednesses of the music business in a mood of gathering gloom, Hollingworth was astonished to hear the Canadian poet suggest: "Make this your last interview. And let's both quit together." Hollingworth took the opportunity to announce Cohen's retirement to the world – somewhat prematurely, as it turned out.

It was during a conversation with John Lennon quite soon afterwards that he began to believe that he could take Cohen's advice seriously. "Cut your hair," the former Beatle allegedly said, "and get a record deal, Roy."

Before long Hollingworth had left the Melody Maker and relocated in New York, where he appeared at the Mercer Arts Center, cradle of the New York Dolls, in front of an audience including David Bowie and Lou Reed. He later formed a band, Roy and the Rams, which included Lenny Kaye, another former critic, who later became Patti Smith's guitarist.

A few years later Hollingworth returned to London, where he eventually released an album, In Your Flesh, produced by his old friend Martin Turner, formerly of Wishbone Ash. He made several tours of Germany and occasionally performed in the back room at the Half Moon in Putney, a renowned rock pub not far from his last home.

Much loved by women, he had many relationships, the last of them with his wife, Anthea, who survives him.