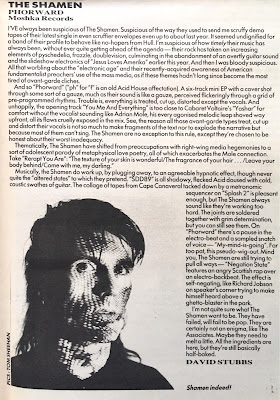 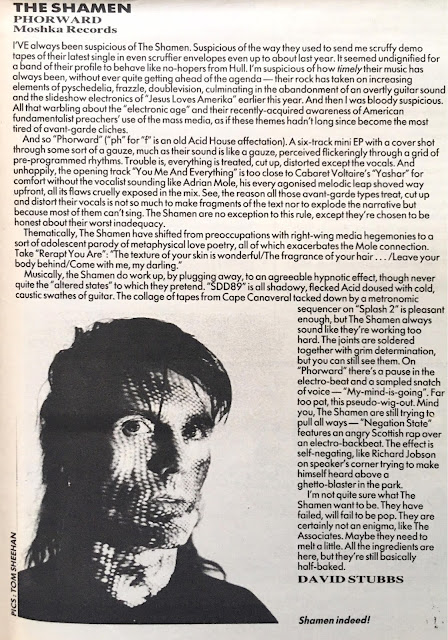 Posted by SIMON REYNOLDS at 9:14 PM No comments: 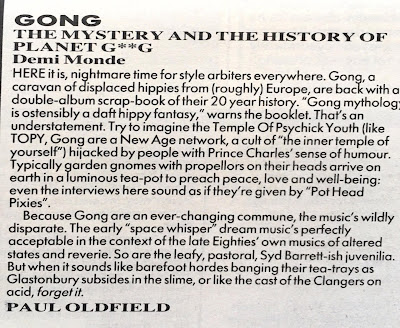 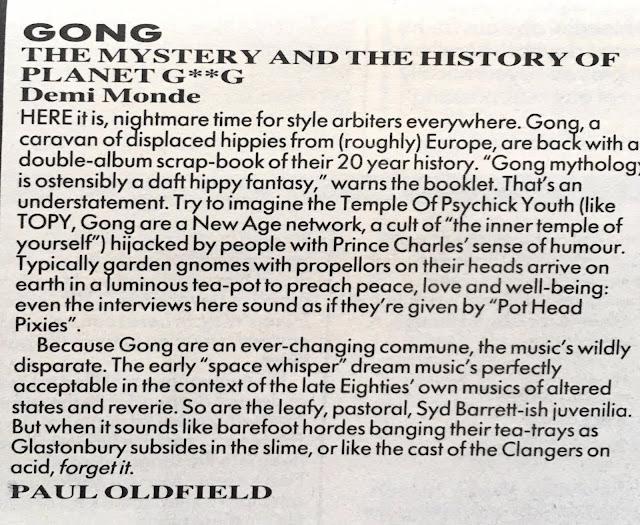 Posted by SIMON REYNOLDS at 9:36 PM No comments: 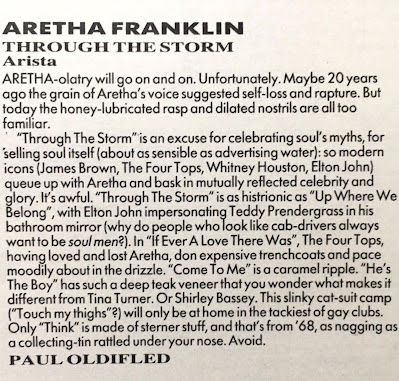 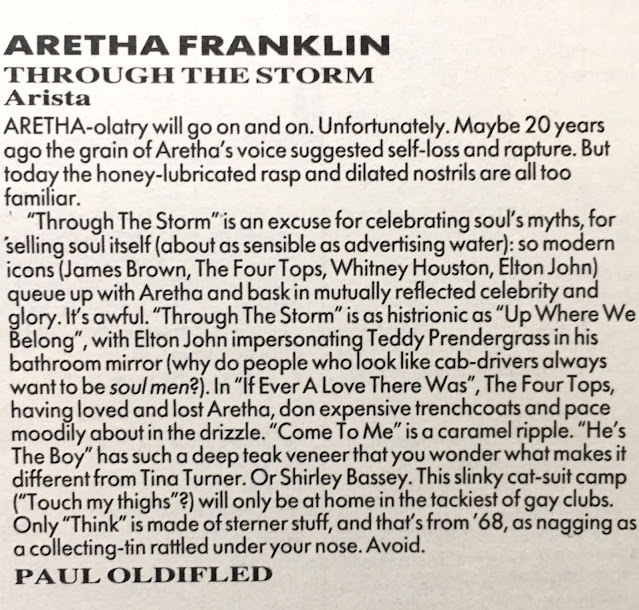 Posted by SIMON REYNOLDS at 7:57 PM No comments: 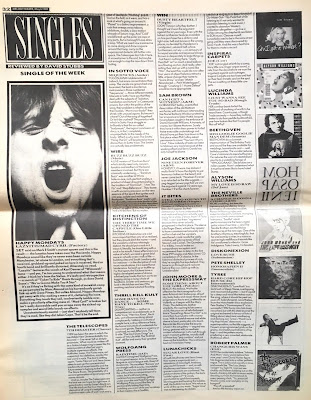 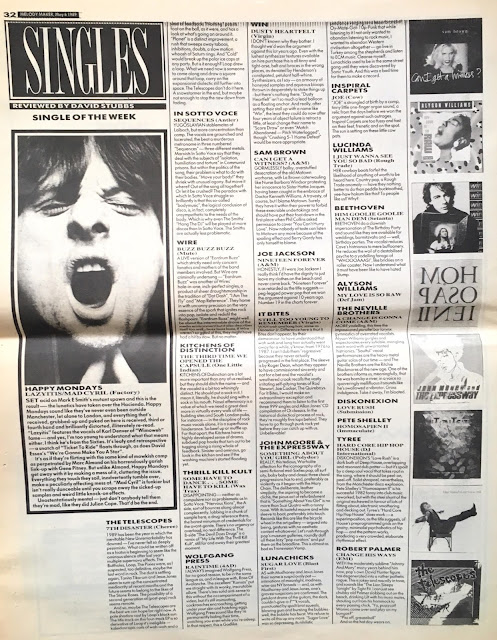 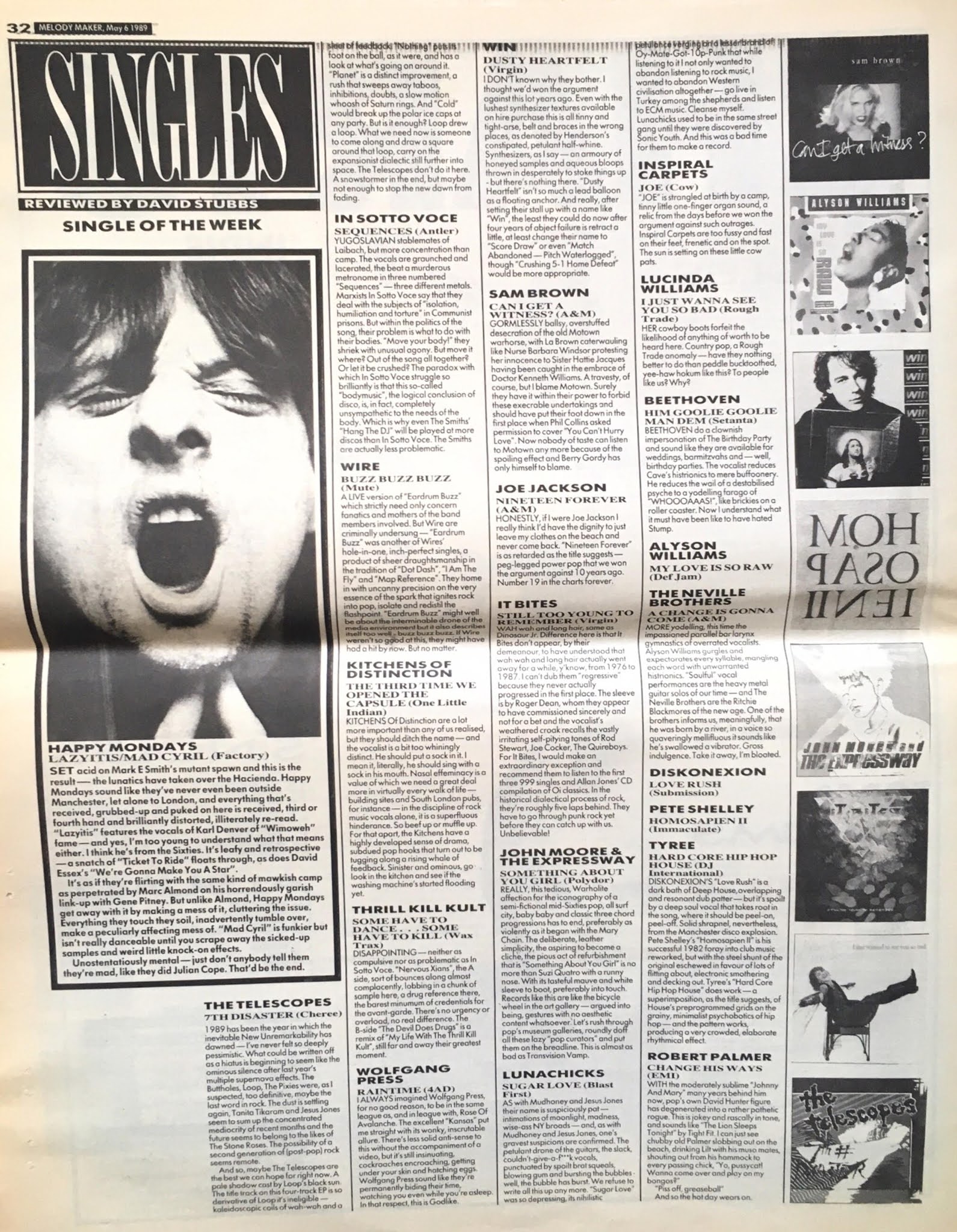 Posted by SIMON REYNOLDS at 2:35 PM No comments: 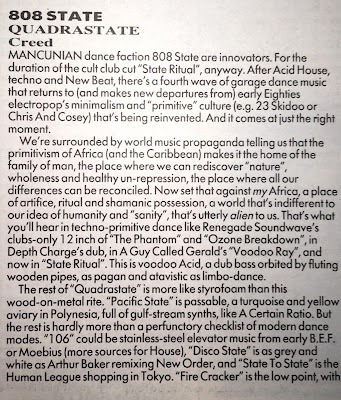 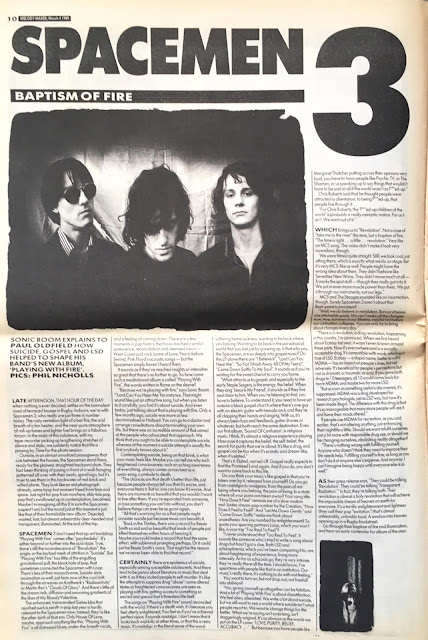 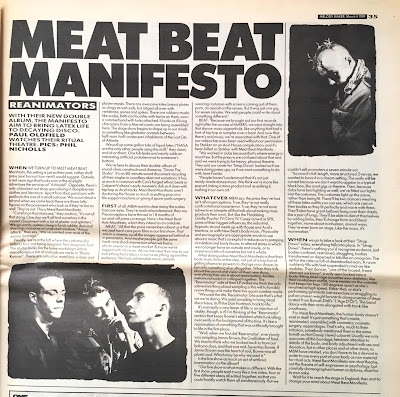 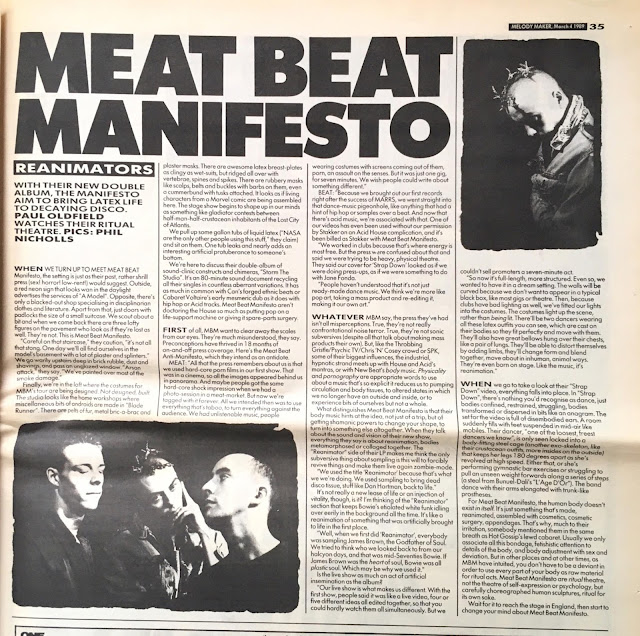 Posted by SIMON REYNOLDS at 6:49 PM No comments: 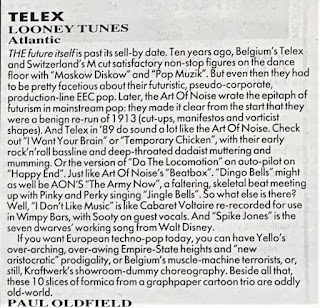 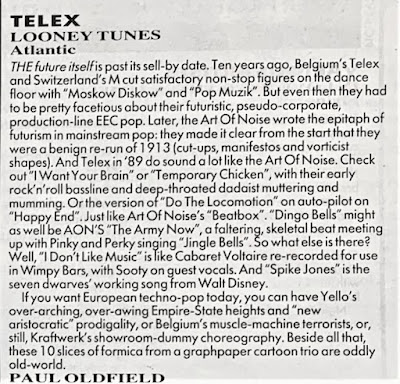 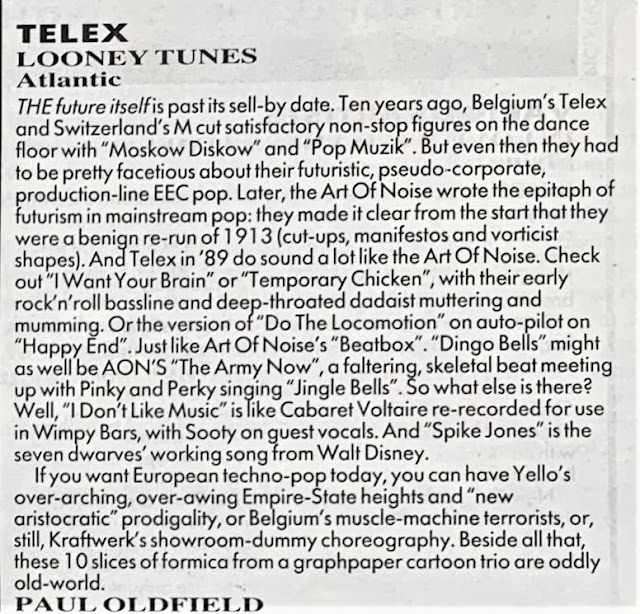 Posted by SIMON REYNOLDS at 10:51 AM No comments: 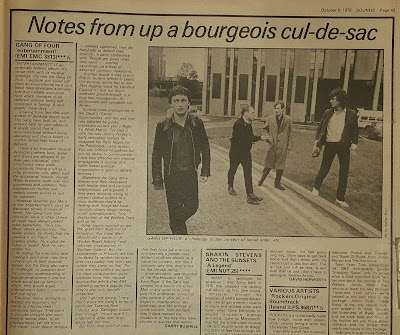 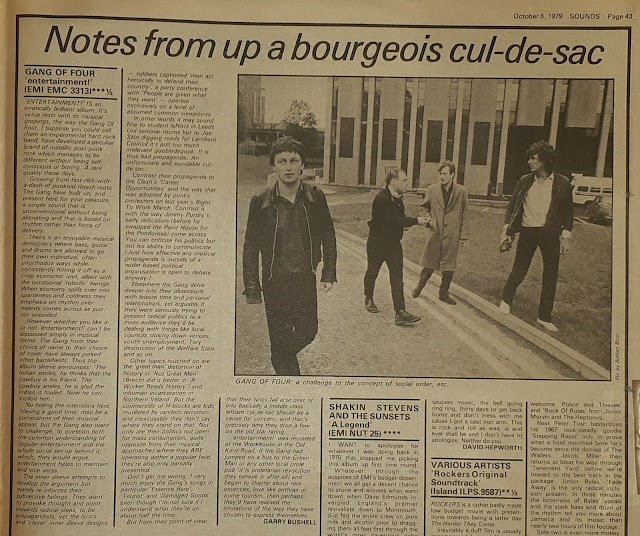 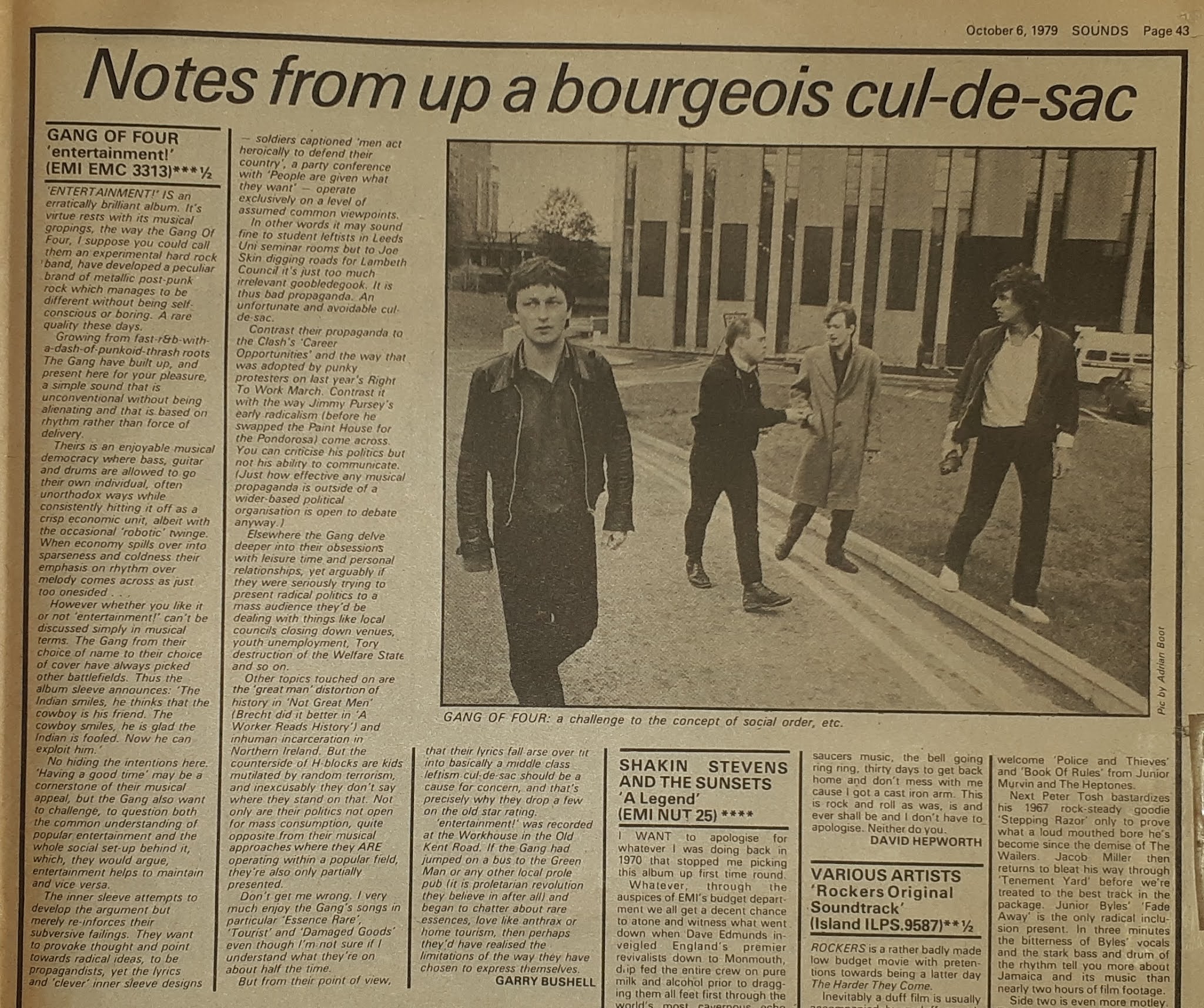 Posted by SIMON REYNOLDS at 10:04 AM No comments:

Posted by SIMON REYNOLDS at 9:28 AM No comments: 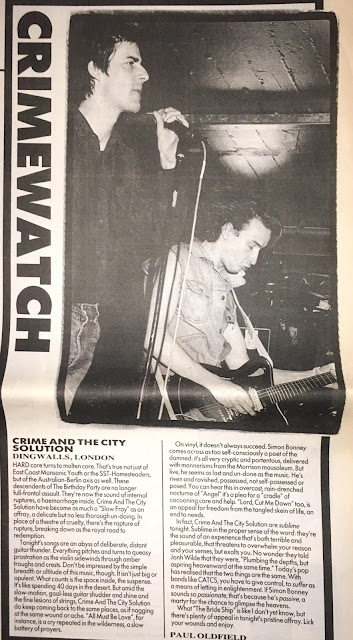 Posted by SIMON REYNOLDS at 11:29 AM No comments:

Posted by SIMON REYNOLDS at 4:15 PM No comments: 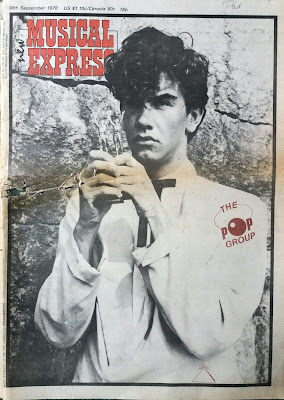 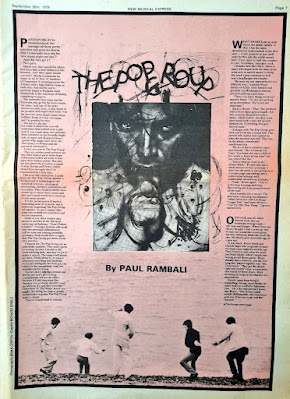 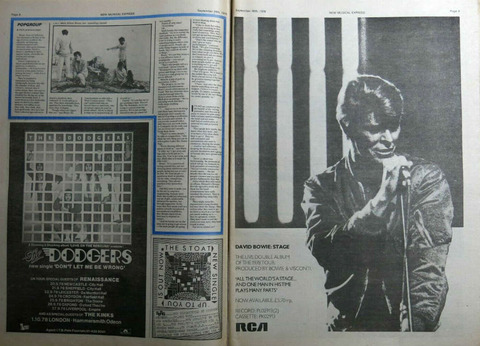 Pardon me if I've misunderstood, but amongst all those pretty speeches and petty let-downs didn't somebody once ask for 'new music night and day'? And did they get it? Not quite.

Maybe you, like a good few others, feel more than a little deflated at this moment. And then again maybe you don't. Maybe it summons no wince at all to hear of members of Generation X swanning across the Atlantic with a high fashion vamp on each arm. And maybe you're perfectly happy to frequent some dismal hole in the vain hope of finding something to pogo to.

The hairstyles may come and hairstyles may go but the facts remain the same. And one of the more incontrovertible facts, is that much of the promise and hoped held forth over the past two years simply hasn't been fulfilled. Some of it has, of course, and I'm grateful for that.

But there's also the fun-while-it-lasted line you will sometimes hear sobbed over a pint. And if you weigh these two attitudes, both somehow on the forcedly bright side of regret and disappointment, against what might have been, the discrepancy is obvious and the potential still massive.

I refer you now to The Pop Group. They are neither punk saviours nor any other kind of great white hope embittered scribes are wont to foist upon their hapless public. But they are just about the proudest example of what Rotten and Perry's edicts should have wrought that I've encountered in a long time.

This is no idle connection. I could have set The Pop Group against a background of technological and industrial neuroses, ideological masterplans, intellect, eclecticism and weirdness. They would probably have owned up to about three counts and this year's myth would have stood up to one more parade.

Yet the perpetuation of myth is something none of us needs, and is indirectly something The Pop Group rail against. To put it simply: they want you to think for yourselves and do for yourselves.

Some of our older readers may perceive an echo of the '60s most enduring catchphrase: "Don't Follow Leaders". Younger factions will recall only the aforesaid inflammatory call-to-arms and ensuing promises, promises. Both would have to agree that The Pop Group put those words into practice.

Chances are The Pop Group are an unfamiliar quantity. They aren't given to turning up once a month at the local watering hole, and they've yet to make a record. The name itself leaves no clues. Think about it. At once it conjures everything and anything. From this ambiguity the least you can expect is the unexpected. And you wouldn't be far wrong.

They're a hard band to contain.

What shakes me up most about this music, simply, is that it has the open, spontaneous temperament of the best jazz – a rare quantity as jazz itself sinks further into the synthi-musak mire. Even rarer to find this coupled to raw, breathless, insurgent rock.

I wonder how they did it, when so many who began from the same point seem now to merely aspire to begin this week's pop sensation or next year's headbanger herd leader.

"Because we just approached it in a different way." explains Bruce matter-of-factly. Only himself and guitarist Jon Waddington had any previous playing experience.

There's so many things involved, mutters Mark. "It's not just picking up an instrument. We're not just musicians."

Back to Bruce: "That's the problem with a lot of these guys in bands. All they concern themselves with is music, which is okay, but they cram their heads with it and end up with blinkers on. Everything else gets shoved aside."

Dialogue with The Pop Group goes back and forth like a tennis ball. One person will explain and expand on what the previous has said. They are, on the whole remarkably unselfconscious.

"We try to leave ourselves open," says Gareth, "like Leonardo Da Vinci. You know the way a child of five wants to learn all the time? He just stayed like that."

"That's what we want to do," chimes Mark. "People only use a small amount of their potential. I don't see the point in just giving up at a certain stage and sinking into a comfortable lethargy with comfortable all-sewn-up attitudes."

Mark fumbles for a record. The afternoon's listening encompasses Miles Davis live with Gil Evans ‘Leggo Dub’ and James Brown's ‘Get Up Offa That Thing’. I groove instinctively.

Onstage and off, Mark Stewart looks like an archetype teenage hunk – all, lean and hungry. When I first saw them I thought I had it sewn up: this lot may not sound like a pop group, but they definitely think they look like one. My theory goes down like egg on a new suit.

It was Mark, Bruce Smith and Gareth Sager who originally formed the band some eighteen months ago. They'd known each other for years and Mark finally talked Gareth into buying an old Burns guitar. Bruce already had a drum kit, and the first song they played together was ‘My Generation’. They got the chords right and couldn't stop, a crazy noise that lasted for three hours, mark straining his lungs in the absence of a microphone.

Gareth, apart from being a compelling onstage visual factor, at times ranks as a willfully obnoxious runt. "He's the only person I know," says Bruce, "who doesn't mind people disliking him, and sometimes goes out of his way to get just that reaction."

Bruce, born in California but relocated to Britain at the age of seven, is almost the opposite: an outgoing, salubrious person who obviously takes great pleasure in conversation. Mark is pensive, speaking in short, angular bursts, much like his singing and onstage demeanour.

Simon Underwood, in whose small Bristol flat we are gathered, is talkative, enthusiastic – he'd never even looked at a bass guitar before joining the band – while Jon is simply taciturn.

They've acquired a reputation for being intellectuals, because they like the stimulus of ideas, and reclusive, because they'd rather dictate their own pace in the quiet Bristol confines than scramble for the big city at the merest favourable noise. I could throw in a few book titles spied on shelves for elitist measure, but suffice to say they walk, they think, they have girlfriends, they have fun. Their collected ages add up to almost a hundred, their collected 'A' levels add up to one. They have unusually keen appetites for knowledge. They steer clear of dogma.

"People often can't figure that out," says Bruce, his Americanisms at odds with a West Country accent. "They can't understand why we haven't been to university, why we haven't spent six years at music school. All we've learnt is what we've learned from all around us."

Gareth: "It's not that we've got anything to hide. Nor is it like The Residents, we're not trying to concoct some big mystery. We're just average characters who got pissed off very quickly."

Pissed off with what?

Mark breaks this temporary deadlock: "we're in exactly the same position as everybody else really. But the difference is we're trying to make something happen where a lot of people aren't. People can make things happen outside of bands, they could do all sorts of things."

Bruce: "It's just that music is a very effective form of propaganda – you can get across to everybody."

"That's why people call us a rock band," muses Gareth. "Because we're up there with guitars and things. I try to say I'm not in a rock group but it's pretty difficult."

Must be a case of guilt by association, I offer.

"The thing is, we use the standard rock instruments..." Bruce's words solicit groans all around. This has obviously been repeated enough times by them to attain cliché status. Mark gives analogy: "We're just using words that don't really mean anything anymore."

"...And we try to do things with those basic instruments that people don't usually do, instead of getting a synthesiser, say, to create new sounds. If you provide yourself with a limit then you can work inside it. Constantly hit the walls and just see if you can't actually break them down.

"There's so many people," he adds in exasperation, "who thinks the only thing you can do with a guitar is play like Jimmy Page.

Bruce: "It's a question of setting yourself free and not worrying about inhibitions and people saying you can or can't do that. We want people to question as much as possible. All the rules, conceptions, everything. They should question every action they take."

And they want to make you do this not by soapbox sloganeering, because most likely this would just substitute one set of glib, comfortable delusions for another, but through suggestion. In the sense that their music itself is a pointer towards unexplored, unconsidered possibilities, they disrupt expectations, force you to respond on instinct.

"And the harder we try the more we're going to get across – the more people are going to start thinking about that kind of thing.

I like to think that when people are watching us they really feel something, some kind of emotion. They don't just get up and bop around or sit down and contemplate."

With a broad sweep of his arms he gestures coming together and eruption.

"Chaos. And after the chaos maybe something new will happen. I'd love to inspire people. To inspire somebody would be one of the best things we could possibly do."

It's no act conducted for the benefit of the visiting journalist, and they are at pains to ensure he goes away with a proper understanding of the band and not some half-baked combination of selected fact and projected fantasy.

They speak their minds, they know what they want, and even have a few ideas about how to get it. They are self-contained and autonomous and want to remain so, sharing the chores – creative and otherwise – of keeping the band in action amongst themselves and a group of friends who have grown with them.

There's a short tour forthcoming, the proceeds of which will go via Amnesty to help prisoners of conscience. This isn't trendy concern for trendy causes – the last benefit they did was for old people's homes and you can't get less fashionable than that.

After which they will record an album. Matumbi's Dennis Bovelle agreed to work with them but his band commitments have sadly scotched the project. They're now considering using John Cale.

They might seem like impassioned young idealist but they deny the charge. They reckon what they want is not an ideal so much as a fact that just needs waking up to – they're optimistic realists.

Posted by SIMON REYNOLDS at 4:14 PM No comments: 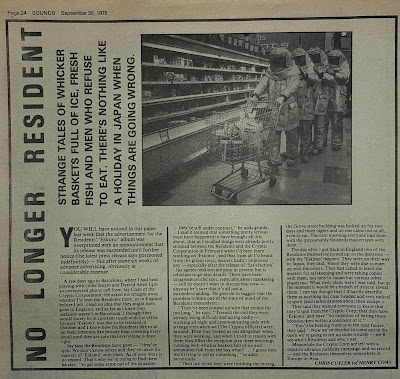 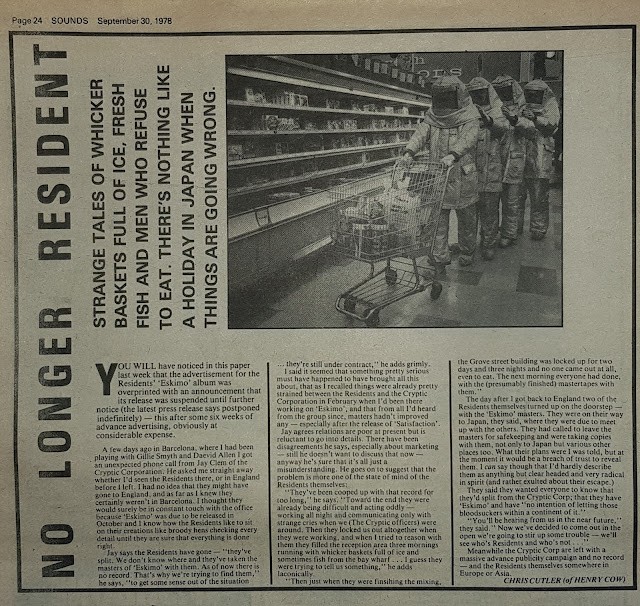 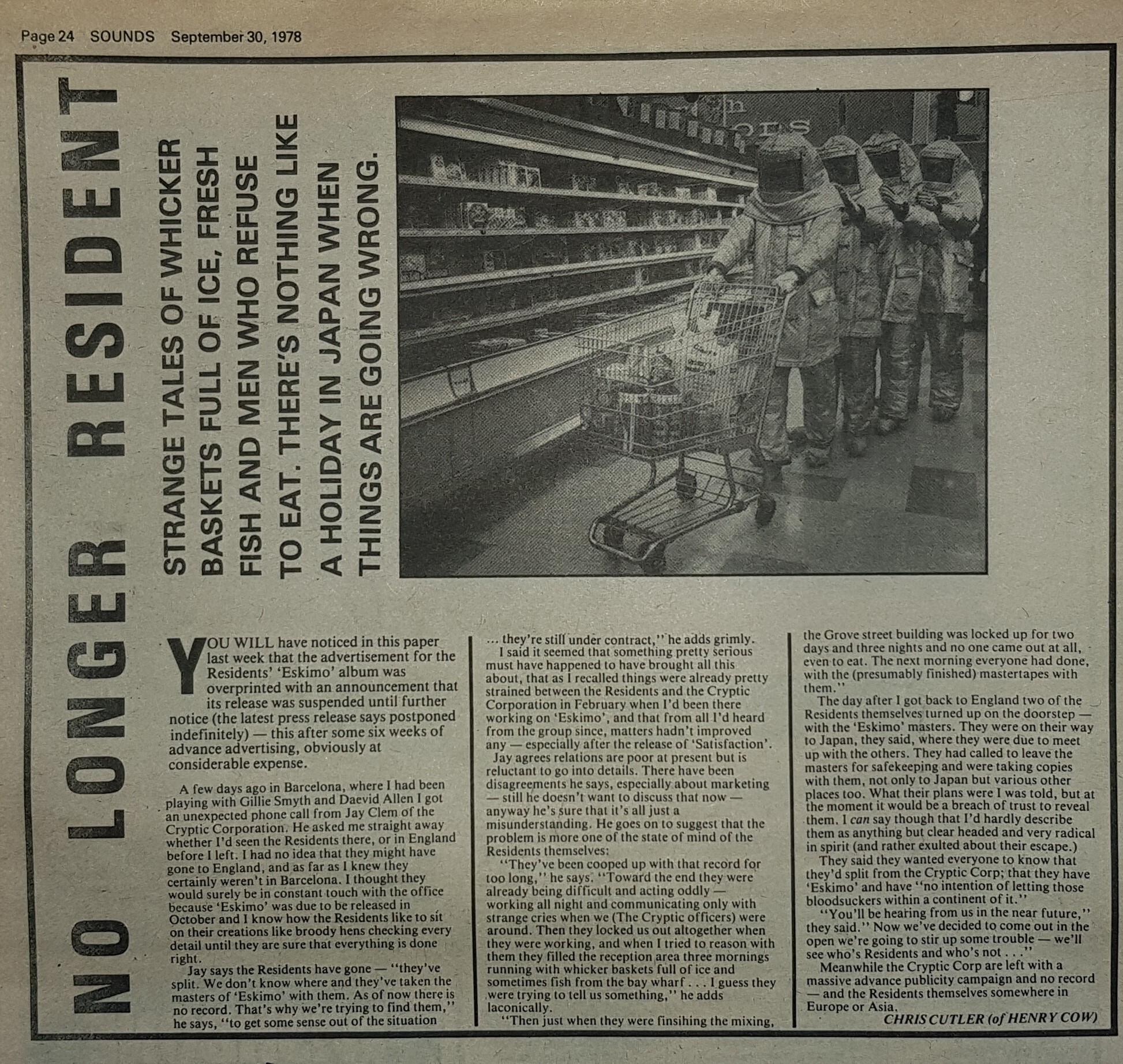 Posted by SIMON REYNOLDS at 12:49 PM No comments: