Posted by SIMON REYNOLDS at 11:40 AM No comments: 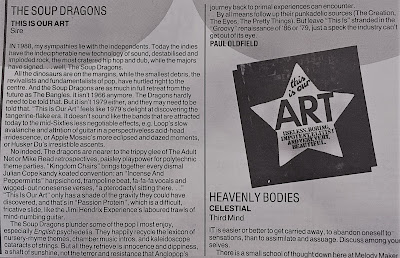 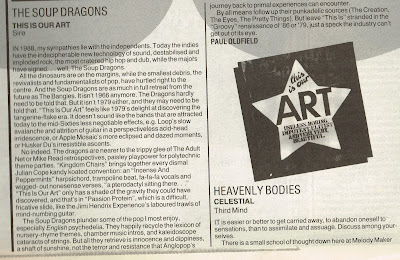 Posted by SIMON REYNOLDS at 12:16 PM No comments:

The Cranes
Self Non Self
Melody Maker, 1989 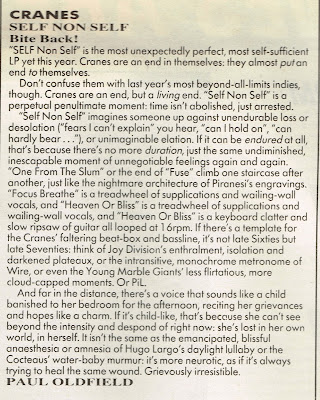 Posted by SIMON REYNOLDS at 4:48 PM No comments: 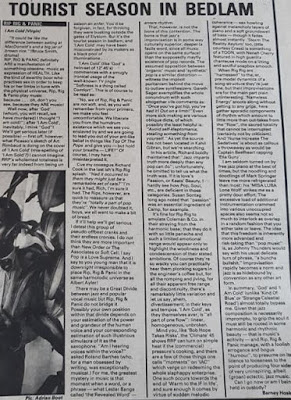 (via Matt Worley)
Posted by SIMON REYNOLDS at 4:48 PM No comments:

Note Paul's extremely precocious use of the term "retromania" - I wonder if that's the first place I ever saw it? More likely I suspect that it was just floating in the ether already.

cf. Stubbsy using the term "Britpop" in 1986. I'm sure I've seen an instance of it being used before then.

Posted by SIMON REYNOLDS at 3:37 PM No comments:

Put A Guy Called Gerald beside the beatmasters, radical rap and survivalist electrodub that make up the rest of tonight's acts, and you'll see that he's somewhere else. Their urgency and agency, their in-your-face imperatives are replaced by his new narcosis and lotus-eating, becalmed passivity. It's all embodied in Gerald himself. There's none of the "front" or danger of the crews that precede him, just a familiar, somnolent Mancunian accent and patient behind-the-scenes programming. If it weren't for his singer up front, and the crowd downstairs setting up an incongruous terrace chant for ''Voo-doo Ray", it'd be more ambience than act.

That's appropriate. Gerald and his northern satellites launched New Age", aka "ambient" house, the phenomenon that emphasises the trance in trance dance, and should reconcile House music with "head" rock. Both musics can offer the same fix, or rather un-fixing of consciousness. Both can free you from the co-ordinates of the here and now, and let you attain oneness with the world and peace.

Gerald translates House music from urban night-life to paradisial, pacific (often literally Pacific, with a capital P) scenes. Tonight there's "Eyes Of Sorrow", with its rainforest percussion and pipes; or 'Voodoo Ray", with its slow-scanning ritual limbo from the tropics; or, as an encore, Gerald's own reading of the halcyon surf of "Pacific State". While rock, rap, dub have kept faith in Africa's heartland, the place of origins and history, House has escaped to the southern hemisphere's soporific, out-of-time innocence and unworldly primitivism.

That shows in the minimalist fluctuations and meander of "Subtopia", a serenity you can lose yourself in. Gerald's visual effects confirm this mesmerising tranquility at the heart of House too. They look as if they're influenced by the new model for the natural sciences, chaos theory (very much a buzz concept in club culture): instead of predictable forces and counter-forces (the grammar of "techno" music), there's indeterminacy and turbulence, back-projections of vapour, clouds, shoals of fish, self-ordering but unpredictable organic forms that fascinate.

But Gerald doesn't celebrate just nature or an Edenic past (none of rock's third-world heritage industry here). He's an unrepentant futurist. Just hear "Automanic", his preview of the forthcoming album: all print-out chatter, split-second samples and arc—light strobes on stage. Or "FX", an ascent through a Lloyds-building ziggurat of glass and steel. Think Tokyo, think Ridley Scott. It doesn't contradict his Pacific states, though. He's found tomorrow's paradise, where hi-tech achieves voodoo's instantaneity of communication, and where cities dematerialise into flows of light and information (think Kraftwerk), a mosaic of signals as mesmerising as the time-lapse record of city life in the film "Kooanisquatsi", but without that film's technophobic undertones.

Gerald's performance is "plastic", as his music's often been called. Plastic in the original sense, of course: adapting to all kinds of shapes, a hypnotic, becalming changeability. Go with the flow.
Posted by SIMON REYNOLDS at 1:44 PM No comments: