Posted by SIMON REYNOLDS at 6:25 PM No comments:

Posted by SIMON REYNOLDS at 1:36 PM No comments:

Posted by SIMON REYNOLDS at 5:35 PM No comments: 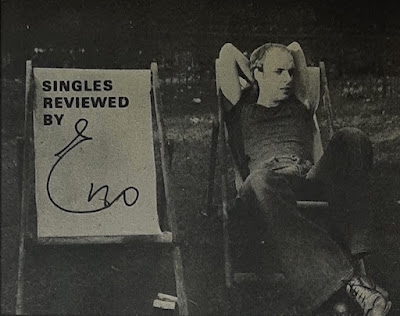 ANTHONY MOORE & SLAPP HAPPY: JOHNNY'S DEAD [Virgin] - This seems to be by far the most interesting record this week. It even has a cover showing Anthony Moore looking weedy and artistic, a popular pose among us rock cognoscenti. This, like most of the records I like, has a built-in sense of failure. It almost certainly won't make the elusive BBC playlist, since they'll no doubt think that the subject of death shouldn't be broached with hoovering housewives. Any of you who are familiar with Slapp Happy's first (superb) album will be pleased to know that the B-side of this single is a new version of Mr Rainbow. Though this doesn't have that kind of frail, elusive quality that Slapp Happy usually achieve, it is nonetheless mysterious and underplayed, both very rare qualities in singles.

THE MIGHTY CLOUDS OF JOY: STONED WORLD [ABC] - Why do people sing songs that tell us to be free and get it together, and in various ways participate in half-baked neo-hippie philosophies? Is it a) because they are naive enough to believe that some change in behaviour patterns might result; b) because they believe it makes a fashionable alternative to writing songs about lost love or new dances; or c) because they feel it's expected of them to be meaningful? The Mighty Clouds Of Joy are presently on tour with The Rolling Stones in America, which might explain the near-cosmic indifference emanating from the ill-considered and tacky orchestration that slops around behind the (very pleasant) lead vocals. I'll give it two of John Peel's stars.

GENE FAITH: CALL THE FBI (MY BABY'S MISSING) [Power Exchange] - This Mr Faith is obviously no Percy. I like this record for a number of reasons; not least among them are the following: a) Mr Faith sings consistently sharp throughout the record, an achievement not to be sniffed at and b) the bass guitar sounds as though it was recorded live from the Soyuz module.

POINTER SISTERS: HOW LONG [ABC] - I was never terribly fond of the Pointer Sisters, but they seem to have tapped a slightly more interesting approach on this single. It is a bit marred by that dreadful tendency one observes among black record producers to erupt into indistinct yelps and hollers (I believe that's what they're called) as the record fades off into posterity. However, this fault is more than compensated for by the nice Staples/gospel feel in the lead vocals. I would even go so far as to say that I like this record. Perhaps I can construct a little plastic bridge over the end section so that I don't have to hear it.

WALT ROCKMAN: Z-SHED [BBC Records] - I might even use this record in future lectures on misuse of the synthesizer, misused here to simulate the squawking of a retarded farmyard duck. This record is truly without peer as the limpest piece of garbage I have ever set ears on. It doesn't grow on you either, so the BBC will have to keep it on their playlist until about 1978 to cover the few pounds it cost to make. Incidentally, it is the theme music for some TV propgramme or other, which is doubtless equally earth-shattering in its crassness. The record is such a paradigm of unmitigated, uncommitted, uninspired, unadventurous, unwanted and uncalled for rubbish that I am now playing it for the fourth time,, my eyes agog, with disbelief, my ears wilting, and my fingers barely able to hit the typewriter. Don't worry Walt; I know you're only doing your job. Someone's got to make records like this.

AMAZING RHYTHM ACES: THIRD RATE ROMANCE [ABC] - The subject matter of this record is quite engaging. It concerns a meeting between two people who don't like each other and culminates in their renting a motel room whereby they can rub against each other abd do all that kind of thing in a half-hearted and lethargic way. Quite a sad record really and, unfortunately, it's not as strong musically as it is lyrically.

FREDDIE FENDER: WASTED DAYS AND WASTED NIGHTS [ABC] - This is a great record. Freddy sounds as though he's some bumbling, pigeon-toed cowboy hick delivering this memorable performance with his dentures in one hand and his private parts in the other. Yes, it does sound as though he's restraining himself from performing some vital bodily function (hold on until the instrumental Freddy). Don't misunderstand me - I really like this record in all its oddness. A truly bizarre voice. It's a pity that American music seems to have temporarily stopped spawning people with bizarre vocal styles - a tradition which was, I suppose, rooted in the blues - in favour of that kind of confident smooth sound typified by Al Green. I conjecture that the blues styles developed out of a sublime mixture of incompetence, and the resultant restraint, plus real pleasure in singing. So perhaps it's one or all three of those qualities that's gone missing for a while.

RIVER: COME A LITTLE CLOSER [Epic] - Talking of confident smoothness, this record typifies both in a kind of rather yucky base of so-called good production. Good production, dear reader, means, in the record industry, that you can hear every sizzle and twitch of that boring high-hat part juxtaposed over every prang of that workmanlike 12-string on the lower left of the stereo next to the bass we added. What I frequently ask myself is, do you need to hear all these things, or for that matter, any of them? Might it be better that some of them obscure each other? This kind of production attempts to take all the mystery and potential for magic out of the sound itself, in order to convince us that everything is all right and under control. This kind of record is the result of a) greater competence among engineers and b) the supposition that certain technological devices are 'essential' to a recording. This is a foolish idea and does not withstand even minimal investigation. It has not occurred to anybody yet that the people who buy equipment for recording studios are more than anyone else responsible for the common identity and similar content of material emerging from that studio. When people talk about the death of rock and so on, they discuss it in the same way people talked politics in the '30s - as though it were a question of right and wrong, lack of spirit, change of motivation etc. or in some mysterious way to do with the "capitalist business machinery of the record industry" attempting to enforce some kind of diluted and averaged-out identity on to all its products. It is neither of these things. They are both connected with human ambitions and intentions and human failure or success, whereas I say that what the key factor on these changes - the technology - is developed, and will continue to develop, entirely independent of that kind of attention. This is not an anti-technological argument, but rather a way that the use of technology is itself an art-form and hasn't yet been recognised as one. Or if it has, it certainly hasn't been recognised by enough good artists. And it has never been identified critically. Back to this record. It's innocuous.

IPOH: IN PURSUIT OF HAPPINESS [CBS] - Some of what has been said above applies here, nut in this case the unashamedly "muzaky" quality endears me somewhat to the record. Muzak is defined as attempting to spread aural light where before there was only silence, chaos and embarrassment. Again, one notices the mistake prevalent among Bishops and Deans of Cathedrals - to illuminate all these deep and mysterious caves and corners with 2,000 watt bulbs "so you can see all the fine detail" that the artisans have put in there. You canm be sure the artisans never saw them. Enlightenment Mixing; The age of Reasons.

HUDSON BROTHERS: RENDEZVOUS [Rocket] - This is quite nice, if a bit drippy, but we all have our drippy phases. The have very beautiful voices but most of the time they seem to feel that they ought not to use them seriously (fear of becoming more drippy?); most of the time they're almost parodying. The B-side is quite odd and better than most B-sides. they really ought to stop trying to come on like they're so worldly, Camp is the process of defending yourself from your influences - a thoroughly unhealthy procedure. If they stopped killing off their brain cells with that LA sun that oozes from their mouths and did a bit of hard work, I imagine they have a promising future. Listening to the B-side again, it's like a Burton's catalogue of American popular music styles - "well sir we can do a nice country and western in harmless grey-green to set off that rhythm and blues..."

BRENT DOWN: NO SWEETER WAY [Torpedo] - Half-hearted reggae with gruesome overdubbed strings and bass. Let me take this opportunity to encourage Torpedo Records to re-release Errol English's single that someone borrowed from me and whose title I've forgotten. Let me also take this opportunity tommention that while you are now all buying Wailers records (as seems to be this month's recommended procedure), don't forget to take occasional pot-luck on some of those other mysterious and univiting platters you see in the Skank-piles, if such a piece of pidgin-Jamaican may be excused. Things like Big Youth and Delroy Wilson. There are some greatv reggae singles laying around unnoticed by companies who manufacture and fail to distribute them. However, I will accept quite a minimal consultancy fee of well below figures to tell them which ones.

MANFRED MANN'S EARTH BAND: SPIRITS IN THE NIGHT [Bronze Records] - I have an underdeveloped admiration for Manfred Mann - as with many other bands I've always enjoyed them but never owned their records. But I don't own many records anyway and have to feel fairly curious to acquire them, so my record collection is a collection of curiosities rather than enjoyable records. This single is not a curiosity but is enjoyable.

THE GLITTER BAND: LOVE IN THE AIR [Bell] - This is produced by Mike Leander, inventor and perpetuator of the Glitter sound. It interests me that most of the interesting work production-wise is done at this level of the music business and not among the so-called "musicianly" strata of the rock community. the sound on this record is very curious and enjoyable - the song is really crappy. I think one must listen to these songs as simply a vehicle for presenting a piece of this kind of sound. The use of the studio is the real artistry here, though I don't think it's anywhere near as bold as the early Glitter singles. There isn't the sense of a risk being taken, and it was that sense permeating the records that made Gary Glitter so remarkable.

PETER SKELLERN: HARD TIMES [Island] / BOB MARLEY & THE WAILERS: SO JAH SAY [Island] - Island Records is one of the few record companies that seems to enjoy music and maintain a high standard in the records they release. Consequently, I must confess to a certain pride in my affiliation to the label. I have deliberately mentioned this side of the Wailers single because I like it much better than the A-side which is in turn nothing to be sneered at. Peter Skellern writes very good songs and this is one of the best. Both substantial singles.

Posted by SIMON REYNOLDS at 11:57 AM No comments: 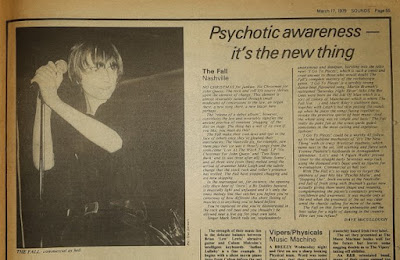 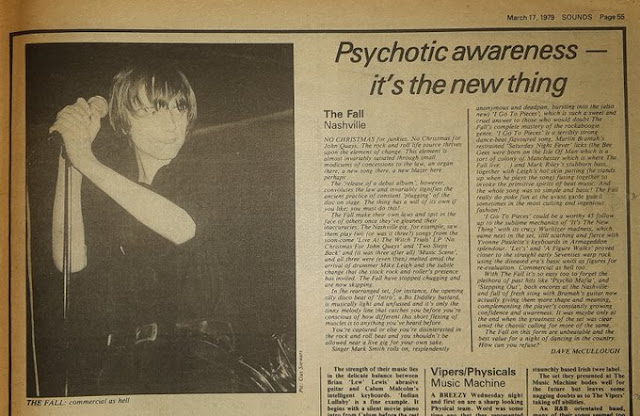 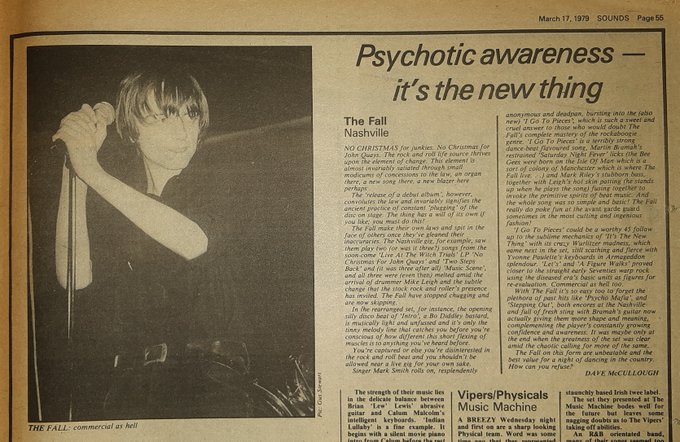 Posted by SIMON REYNOLDS at 9:23 AM No comments: 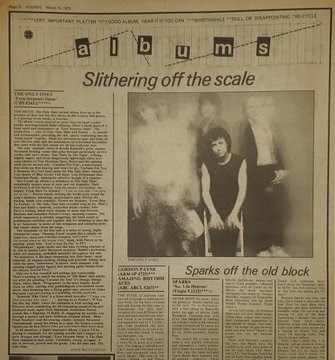 Posted by SIMON REYNOLDS at 9:23 AM No comments:

Labels: DAVE McCULLOUGH, SOUNDS 1979, THE ONLY ONES 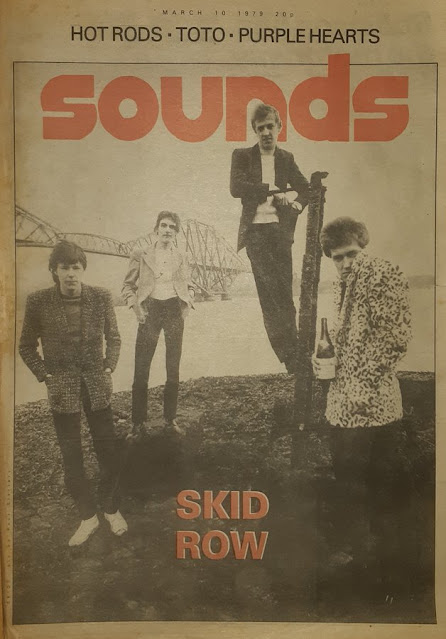 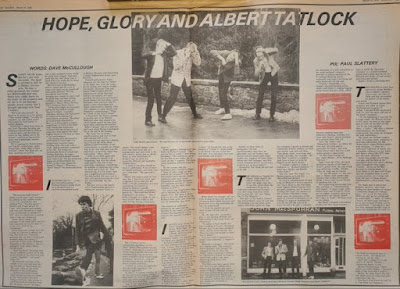 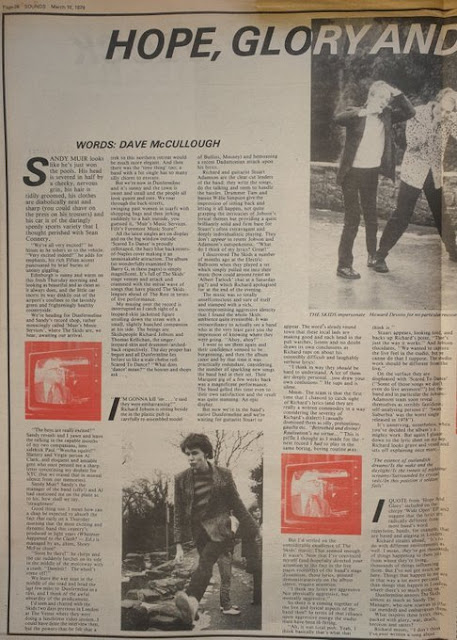 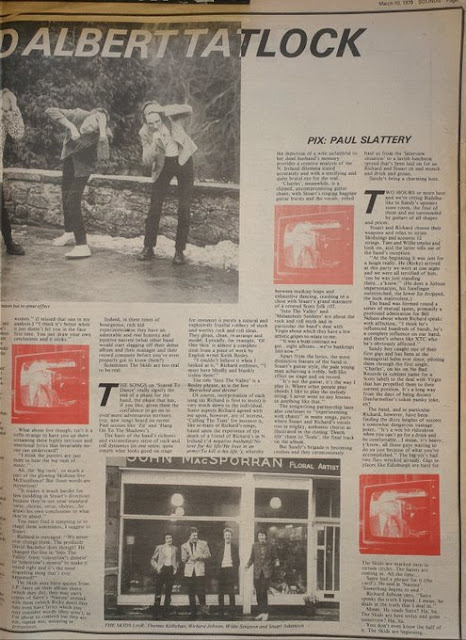 Posted by SIMON REYNOLDS at 11:04 AM No comments: 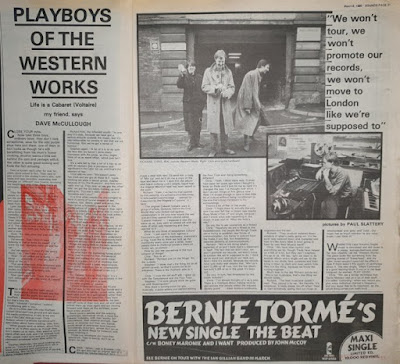 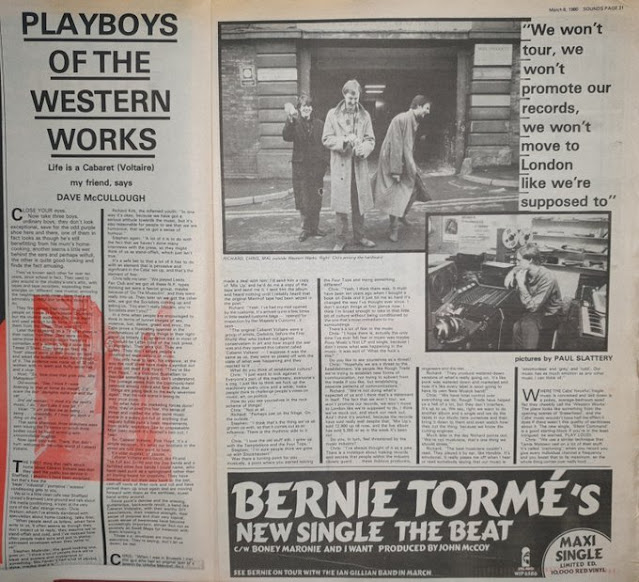 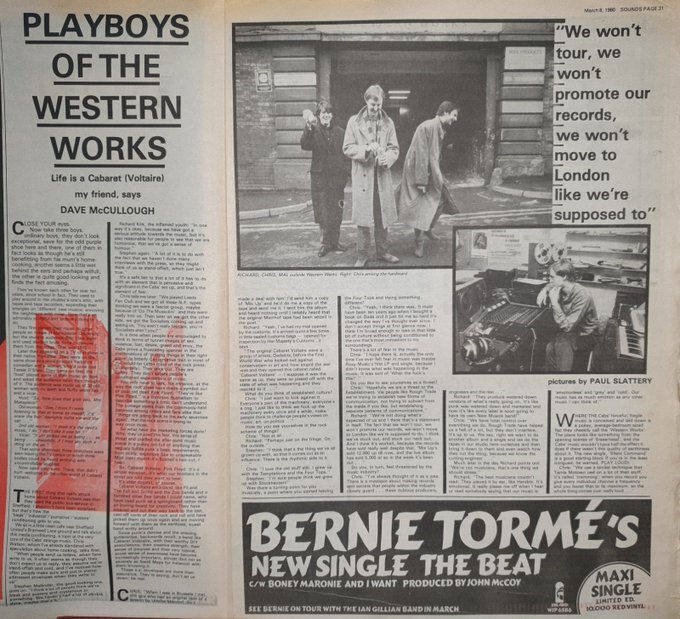 Posted by SIMON REYNOLDS at 10:19 AM No comments: