in celebration of the reissue of Barney's Say It One Time for the Broken Hearted: Country Soul in the American South.
Posted by SIMON REYNOLDS at 1:01 PM No comments:

- this is not actually the first piece by Roy Hollingworth on The New York Dolls - he wrote an earlier one for Melody Maker, in July 1972, which appears to be the every first piece on the Dolls anywhere, beating all the local American critics to the punch. I don't have that one to hand, but this later celebration is very much of a piece with its spirit: a proto-punk exaltation of incompetence and the superiority of attitude over accomplishment, no doubt influenced by reading Creem.

This is the story of the last rock and roll band. The New York Dolls. There won't be another. They are the last of propellor aircraft. What follows will mean nowt.
For the Dolls… Well, I would travel to Sydney, Australia — for they are the remnants of what it was all about.
Holiday Inn, Atlanta, Georgia. Clarissa was 19 when she first saw the New York Dolls. That was last night at Richards, Atlanta. Now she is 27, and knows everything about everything.
"They were like taking a legal drug man. I thought rock and roll was the Allman Brothers. It ain't. It's the New York Dolls."
After breakfast, and a cup of Chivas Regal whiskey which spread the tongue like acid, I wandered to the hotel bar.
Slaves
Two Georgia musicians sang scenes from Sgt. Pepper. The lead singer sang "How many moles in Blackburn. Lancashire." I laughed, and told him later that they don't have moles in Blackburn but holes.
"Why? said the singer, scratching his checked cowboy/John Wayne/Gene Autrey/Shirt.
"Because moles were banned from Lancashire in 1887 by Henry Plimsoll of Derby, who also invented white painted lines to put around the hulks of ships so they would not sink under the weight of slaves."
Ah! Slaves. Georgia. Where the main percentage of people who serve upon other people are Black. Some civil war!
"I want a slave" said David Jo Hansen, lead drinker of the Dolls.
It is 3.15 AM and I am stood on a street corner in Atlanta, and it is pouring. I am very wet. But as I wait for a cab, I am very happy.
Happy 'cause I just danced my thighs three inches thinner for the Dolls.
They crawled on stage. Arthur "Glib" Kane, Johnny "Nine Legs" Thunders, Sylvain Sylvain, Jerry Nolan, and Mr. Ego 1984 David Jo Hansen.
You know, my chums, this band makes Alice Cooper looks like the Bronte Sisters.
In other words, they are awful — in the truest and most beautiful sense of the word. Johnny Thunders left the stage in Chicago the other night and retched into the dressing room table of flowers. Now that is rock and roll.
Bombed
Audience seated sipping large drinks of vodka, mixed with pills and other luxuries.
"The critics really bombed us in Chicago," said David Jo Hansen, lead singer. "But we love criticism. We're not just masochistic about being put down. We're something else."
Lights on. Arthur Kane, bassist, mild as the very finest washing up liquid, stands. Arthur. Blond. He looks like a mutated Marlene Deitrich. But he plugs in and goes blmmm... blmmm... blmmm...
Sylvain Sylvain plays just one bloody chord and the blood runs. And that club moves.
Jo Hansen singing like a newspaper seller. He rips his shirt open and there is a white waistcoat and skin, and he bites the top off a bottle of California wine, and drinks it down, froth, bubbles and all.
And then he sucks the bottle. "WOW" say the girls close to the stage.
But I thought we were all singer songwriters now? I thought rock and roll was over? I thought when John Lennon sang 'All I Want Is The Truth' that it was the end and we'd all start singing Tom Paxton numbers again?
But nay. Here on this stage battles a baggage of balls and trousers and high-heeled shoes; and drunkeness and unwashed hair; and untuned guitars and songs that musicians would call a mess.
But a rock and roll child would say "God Bless You — You are so necessary!"
Rock and roll is sex. And the Dolls played on. And they played sex. Non-stop.
They scratched and broke picks and played licks that were sick and copied and had been played before. But never like this! Never like the Dolls played it.
And then there was the lovely looking lady who shook her lips and danced 'Personality Crisis'.
Robbery
She dances, and falls, and the guys around her laugh. It wasn't funny. I picked her up. The Dolls jive on. Jive like there was never, ever again to be a tomorrow. And in this case there wasn't.
My head aches, with enjoyment. 12-bar boogie, chords struck like a lumberjack struck a tree. Who are we?
There was a television in the lounge. There was a bank robbery this very evening. And you know — this was the worst bank robbery ever. There was a live film of it.
They — the Georgia State Police — put 48 bullets in that robber. And when his body started to fall apart they stopped shooting. We heard the shooting. We saw the body.
Ever and anon, like a cigarette smoker takes a cigarette to his lips, we went back and danced to The Dolls. The Dolls. Now a pigsty of sweaty smell and stale alcohol. But they still play.
No! No messages. No instructions through song! Nothing to think about. Nothing to admire. Few words rhyme, or for that matter mean anything.
But when spewed by David Jo Hansen — then they are rock and roll. No! No protest songs that mean anything. Just... Just... Protest.
The hottest thing I've seen. Hotter than 12 pokers thrust in your eyes. Hotter than Marlene Dietrich — is the New York Dolls.

Posted by SIMON REYNOLDS at 6:51 PM No comments: 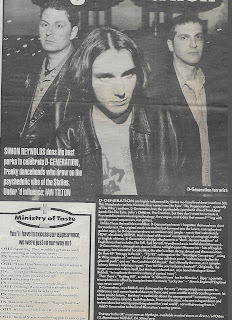 D-Generation are highly influenced by '60s mod and freakbeat. This Manchester trio took their name from The Eyes' "My Degeneration", a parody of The Who's anthem. D-Generation love the psychedelic/psychotic intensity of freakbeat bands like The Eyes, John's Children, The Creation, but they don't want to recreate it. Psychedelia means abusing technology, they argue, and today that means fucking with samplers and sequencers, not guitars.

Unlike These Animal Men and Blur, D-Generation haven't forgotten that mod was short for modernist. The original mods wanted to fast-forward into the future, not replay lost
golden ages. So D-Generation's "psychedelic futurism" draws on ambient and jungle--music that's absolutely NOW, absolutely BRITISH. And instead of the usual iconography of swinging London or English whimsy, D-Generation pledge allegiance to a "dark, deviant tradition"
of Englishness that includes The Fall, Syd Barrett, Wyndham Lewis, Powell/Pressburger and Michael Moorcock.

D-Generation's atmospheric dance is like a twilight-zone Ultramarine--lots of English imagery, but instead of bucolic bliss, the vibe is urban decay, dread and disassociation. On
their EP "Entropy In the UK", "73/93" rails against the "Nostalgia Conspiracy", using Dr Who samples of "no future". D-Generation call their music "techno haunted by the ghost of
punk" and on 'The Condition Of Muzak' that's literally the case, as it samples Johnny Rotten's infamous taunt: 'ever get the feeling you've been cheated?". Originally, the target was
rave culture itself, but this has widened out, says band ideologue Simon Biddell, "to implicate the entire culture of cynical irony." Then there's "Rotting Hill", a stab at "a 'Ghost Town' for the '90s"; Elgar's patriotic triumphalism is offset by samples from the movie Lucky Jim--"Merrie England? England was never merry!".
D-Generation, says Biddell, are dismayed by the way "young people are content to embrace a rock canon handed down to them, and seem unable to embrace the present, let alone
posit a future." But they're optimistic about the emergence of "a counter-scene, bands like Disco Inferno, Bark Psychosis, Pram, Insides, who are using ambient and techno ideas but
saying something about the 'real world', not withdrawing from it".

Add D-Generation to the list of this nation's saving graces.

and the sequel act 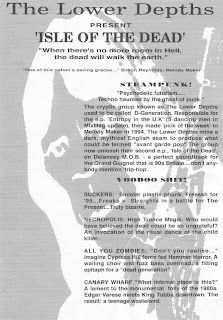 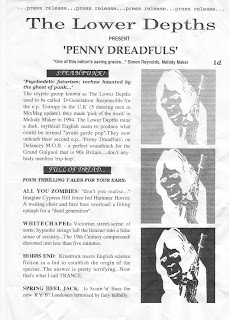 Posted by SIMON REYNOLDS at 9:04 PM No comments: