Posted by SIMON REYNOLDS at 10:22 PM No comments:

Posted by SIMON REYNOLDS at 12:23 PM No comments:

"FILE between Ian McEwan and Charles Hawtry," concluded one reviewer two years back, leaving us to tease out what that "between" is. Pulp are easily underestimated as ghosts from the Ealing or Hammer studio lots, standard bearers of the English-ness and depthless drollery we'd usually expect from El records.

The word "freak" comes nearer to their connection of comedy and horror: it suggests what's aberrant but recognisable, a source of laughter and shrinking fear. Even if Jarvis Cocker's vocal delivery brings Pulp within sight of It's Immaterial or The Fall, it's the crepuscular ballads, always bordering on histrionics, of Sixties godlike genius Scott Walker that are the nearest precedent.

Everyday life assumes the shudder of the uncanny in "Anorexic Beauty", where the ashen-faced and comically immobile mannequin girl exercises this dreadful attraction, comes too near beauty. In "I Want You", love is a catastrophic immolation. "I'll throw myself away, I'll break you because I love myself in you". In "They Suffocate At Night" intimacy develops till it wraps itself in polythene sheets, becomes exhaustion and vacuum, and "The Never-Ending Story"'s juggernaut Khachaturian refrain mimes endless reprieves for a failed love-affair.

Far from eccentric, Pulp's pasteboard theatre finds the freak limits of behaviour amid life's parking meters, bed-sits and milk floats of mundanity.
Posted by SIMON REYNOLDS at 5:08 PM No comments:

A proposal by Paul Oldfield and me to write a profile of ECM Records and its chamber-jazz  on the occasion of its 20th birthday in 1989.  It would have been the third in a trilogy of pieces we co-wrote for the Guardian, including a moderately infamous critique of world music and a defense of hyper-masculine music like rap, metal and Electronic Body Music (for the deconstruction of male psychology it afforded). We were really pushing it with this one though and it's hardly surprising it wasn't given the green light.  Apart from the ideas in it, the length of the proposal itself is .... well, feature-length. A la Borges, it's a map of the territory that is the same size as the territory itself.

This year Germany's ECM record label celebrates its
twentieth anniversary. Because it doesn't promote itself, ECM
has always had a low profile: this despite its commercial
success in the Seventies with artists like Pat Metheny, Keith
Jarrett and Chick Corea, and a current roster that ranges
from acclaimed improviser Jan Garbarek to the Estonian
composer Arvo Part. This relative obscurity stems from the
label's founder, Manfred Eicher, who has zealously preserved
his vision of ECM as an island apart from the modishness and
market-consciousness of the music industry, whose output he
characterises as "environmental pollution".


But it's this very "apartness" that has proved so
attractive to the increasing number of pop musicians who have
fallen under ECM's spell during the Eighties.  David Sylvian
left behind his glam icon past as lead singer of Japan in
order to pursue a solo career in 'ambient pop', and has
recorded several albums with musicians from the ECM stable.
'Dreampop' experimentalists A.R. Kane have explicitly cited
ECM as an influence, and other groups (Cocteau Twins, Talk
Talk, Durutti Column, Hugo Largo) have much in common with
ECM's quest for "the most beautiful sound next to silence".

As well as it's influence on the pop avant-garde, ECM is
important because of the way it illustrates what both "New
Age" music and "world music" (those buzz concepts of the
Eighties) could and should have been like. New Age music
tends to be the aural equivalent of a Radox bath: it's
therapeutic, a palliative that helps sustain the listener
against, but also within the demands of modern, capitalist
life. Like vitamin supplements or homeopathic remedies, New
Age records are little capsules of pastoralism that enable
the stressed-out executive to cope with urban life. New Age's
soothing emulsions of sound, like Transcendental Meditation
for businessmen, are a tranquiliser rather than a path to
enlightenment. But ECM's "tranquility" is debilitating rather
than restorative: it's about fixing your consciousness on
something until you lose all sense of yourself and your
separateness.  The crystalline, open structures of John
Abercrombie's or Ralph Towner's music suggest not so much
withdrawal as a hyper-alert state of suspension, heightened
receptivity.

This "meditational" aspect of ECM music is close to
the Eastern idea of nirvana: the serenity that comes with the
cessation of desire. In his later years, Freud came to
believe in the existence of a "nirvana principle" or "death
instinct" inherent in all organic life: a drive that seeks to
return to the lowest possible point of tension. Freud
believed that human anxiety was caused by the repression of
this natural 'death instinct', resulting in a futile pursuit
of immortality through wordly achievement. 'Nirvana' is the
state-of-grace that comes with the recovery of contact with
the 'death instinct': a sublime inertia where you're wide
open to the world rather than restlessly engaged in leaving
your mark upon it.

'Nirvana' is, in fact, a kind of living death or 'life-
in-death'. So it's interesting that Manfred Eicher describes
ECM music in terms of entombment, of sound that is "burying
itself in a crypt of its own making". It's a metaphor that
connects with the very funereal/Egyptian images of 'cool
jazz' found in Miles Davis or Sun Ra. Other sources of this
meditational/monastical condition are the pervasive
Mediaevalism of ECM (its interest in liturgical, devotional
music) and also its attraction to the Romantics, with their
awe before the "sublime" and "terrible". (ECM's Russian
pianist Valery Afannasiev talks about music that should be
fatal in its beauty, such as Gesualdo's madrigals).

ECM suggest this blurring of boundaries, this blissful
oneness with the world, by their recurrent use of LP cover
images and titles that suggest immense, undifferentiated
spaces - polar landscapes, tundra, deserts, barren cliffs -
expanses that are unchanging over the millenia.  ECM's
artists never seem to have any referents, no locus in time or
space.  This nomadism, exemplifed by titles like "Wayfarer"
and "Paths, Prints", is based in the intuition that true
bliss is to be nowhere, bewildered in the wilderness.  (It's
revealing that the root meaning of "utopia" is nowhere).

This placelessness distinguishes ECM from the "world
music" that it has supposed to have prefigured by a decade or
more.  ECM do draw on ethnic music, but this is world music
without any of the Western, liberal ideologies attached to
it: there's nothing rootsy, convivial or feistily "authentic"
about it.  Different cultures are crossed at will. An artist
like Stephen Micus uses instruments from every conceivable
time and place, and even invents his own. These ethnic or
ancient musics are often "inauthentic" too: where music
hasn't been written down (e.g. for the albums of Mediaeval
songs) new music is composed, or music from completely
different times and places borrowed for the accompaniment.

Nor is there world music's dogged adherence to Third World
or folk sources. ECM musicians also borrow from elitist,
court cultures, as in Paul Hillier's troubador courtly-love
songs from 12th Century Provence, or Micus' use of
instruments from early European orchestras. Or there's Arvo
Part, who gave up writing serial music, and turned to a
minimalist, neo-Mediaeval partsong. Or the improviser Keith
Jarrett playing a Bach stripped of baroque mannerism or
modern musicianly interpretation and "feeling".  Unlike world
music, ECM doesn't try to rediscover pop's Dionysiac values
elsewhere; unlike "authentic" classical performers, it
doesn't try to recreate music as it was.

ECM music, then, is a quest for nirvana through the
transcending of time and place. ECM music offers the listener
a gentle apocalypse (an "end of history" and an "end of
geography"): a tiny foretaste of eternity. Perhaps this
timelessness is actually the most timely phenomenon today:
perfect rest at the heart of the pop world's hyper-active
clatter, an "endless end" to pop's relentless turnover of
the new.
Posted by SIMON REYNOLDS at 11:05 AM 1 comment: 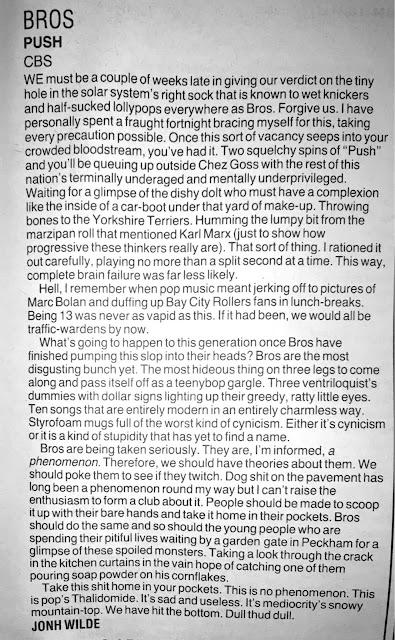 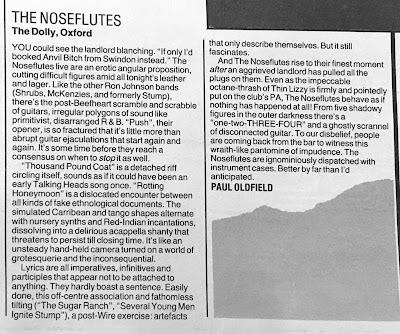 Posted by SIMON REYNOLDS at 12:38 PM No comments:

Posted by SIMON REYNOLDS at 6:52 PM No comments: 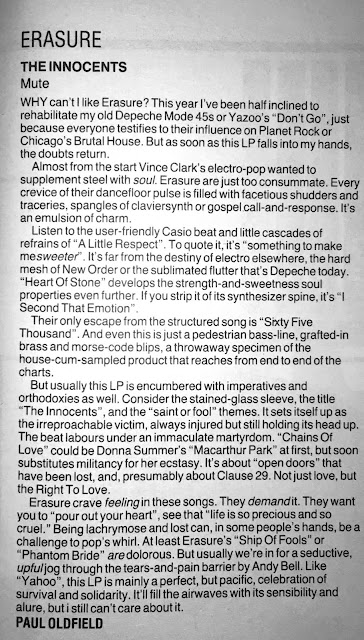 Posted by SIMON REYNOLDS at 5:48 PM No comments: 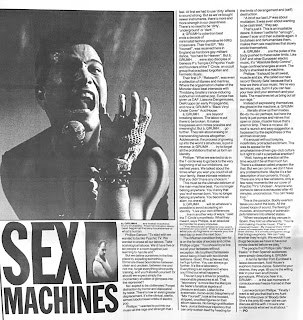 Posted by SIMON REYNOLDS at 3:17 PM No comments:

Posted by SIMON REYNOLDS at 12:43 PM No comments: