In A Silent Way

This is the kind of album that gives you faith in the future of music. It is not rock and roll, but it's nothing stereotyped as jazz either. All at once, it owes almost as much to the techniques developed by rock improvisors in the last four years as to Davis' jazz background. It is part of a transcendental new music which flushes categories away and, while using musical devices from all styles and cultures, is defined mainly by its deep emotion and unaffected originality.

Miles has always gone his own way, a musician of strength and dignity who has never made the compromise (so poisonous to jazz now) with "pop" fads. It is a testimony to his authenticity that he has never worried about setting styles either, but continued his deeply felt experiment for two decades now. Albums like Miles Ahead, Kind of Blue and Sketches of Spain simply do not get old, and contain some of the most moving experiences that any music has to offer. In his new album, the best he has made in some time, he turns to "space music" and a reverent, timeless realm of pure song, the kind of music which comes along ever so often and stops us momentarily, making us think that this perhaps is the core around which all of our wayward musical highways have revolved, the primal yet futuristic and totally uncontrived sound which gives the deepest, most lasting sustenance to our souls, the living contemporary definition of great art.

The songs are long jams with a minimum of preplanned structure. That they are so cohesive and sustained is a testament to the experience and sensitivity of the musicians involved. Miles' lines are like shots of distilled passion, the kind of evocative, liberating riffs that decades of strivers build their styles on. Aside from Charles Mingus, there is no other musician alive today who communicates such a yearning, controlled intensity, the transformation of life's inchoate passions and tensions into aural adventures that find a permanent place in your consciousness and influence your basic definitions of music. And his sidemen also rise to the occasion, most of them playing better than I have ever heard them before. Certainly Herbie Hancock (piano), Wayne Shorter (tenor sax), and Joe Zawinul (organ) have never seemed so transported. The miracle of jazz is that a great leader can bring merely competent musicians to incredible heights of inspiration—Mingus has always been famous for this, and Miles has increasingly proven himself a master of this incredibly delicate art.

The first side is taken up by a long jam called "Shhh/Peaceful." Tony Williams' cymbal-and-brush work and the subtle arabesques of Zawinul's organ set a space trip, a mood of suspended time and infinite interior vistas. But when Miles enters, the humanity and tenderness of his trumpet's soft cries are enough to bring you tears. I've heard that when he was making this album, Miles had been listening to Jimi Hendrix and Sly and the Family Stone, but the feeling here is closer to something like "2000 Light Years From Home" by the Stones. It is space music, but with an overwhelmingly human component that makes it much more moving and enduring than most of its rock counterparts.

Side two opens and closes with the best song on the album, a timeless trumpet prayer called "In a Silent Way." There has always been something eternal and pure in Miles' music, and this piece captures that quality as well as anything he's ever recorded. If, as I believe, Miles is an artist for the ages, then this piece will be among those that stand through those vast tracks of time to remind future generations of the oneness of human experience.

Between the two takes of "Silent Way" lies "It's About That Time," a terse, restrained space jam somewhat reminiscent of the one on the first side but a bit sharper, allowing more of Miles' fierce blues ethos to burn through. This is the one that might be connected to Miles' interest in Hendrix and Sly.

They say that jazz has become menopausal, and there is much truth in the statement. Rock too seems to have suffered under a numbing plethora of standardized Sounds. But I believe there is a new music in the air, a total art which knows no boundaries or categories, a new school run by geniuses indifferent to fashion. And I also believe that the ineluctable power and honesty of their music shall prevail. Miles Davis is one of those geniuses.

But just to show he could get it wrong as well as right:

a portion of “Kind of Grim: Unraveling the Miles Perplex” (Phonograph Record, June 1976)

... But here I sit, nearly three years later, and this man and his music refuse to ease their stranglehold on my tastes, more, my emotions. I am obsessed with him because he once released Sketches of Spain, which contains an adagio passage in Rodrigo’s ‘Concierto De Aranjuen’ which may hold more distilled sorrow than any other single solo by anyone I have ever heard; I am obsessed with him because Kind of Blue, like Birth of the Cool a decade previous, defined an era and produced some of the most beautiful, spacious, expansively inspired music it was to know; I’m obsessed because In a Silent Way came close to changing my life, reinstalling a respect for the truly spiritual aspects of music when I was otherwise intent on wallowing in grits and metal; I’m obsessed, simply because he is Miles, one of the greatest musicians who ever lived, and when a giant gets cancer of the soul you have to weep or at least ask for a medical inquiry.

Which is why I have been studying Miles’ work for the past year or so, trying to figure out where (if?) he went wrong. Think about the fact that this guy has been making “jazz” records since the late Forties, and that many of them, way more than any single musician’s share, have become (to borrow the title of one) milestones. The man has defined at least three eras in American music – can Dylan say the same? Never mind that when In a Silent Way came out it had the same effect as Charlie Parker’s renaissance and influence on his followers – i.e., it ruined a whole generation of musicians who were so swept by its brilliant departure that they could do nothing but slavishly imitate so every goddamn album you heard dribbled the same watered-down-kitsch-copy of Miles’ electric cathedral – it remains that now, seven years later. In a Silent Way not only has not dated but stands with Sketches of Spain and a few other Miles albums as one of the sonic monuments of our time. And that’s neither hype nor hyperbole.

But since then, the years, private problems, celebrityhood, hipper-than-thous – something, whatever, has taken its toll. On the Corner was garbage. So was, with the possible exception of one bit I have been told about but am unable to find in its four unbounded 30-minute sides, Miles Davis in Concert.  Big Fun and Get Up with It were largely left-overs, with predictably erratic results. The former’s “Go Ahead John” was a cooker, but too much of the rest was something never previously expected of Miles, simple ideas repeated for whole sides, up to a half hour each, in an electronicized receptiveness and distortion-for-its-own-sake that may have been intended as hypnotic but ended up merely static. What was perhaps even more disturbing was that once you got past the predictability and disappointment and analyzed the actual content of the music, it took Miles past his traditional (and traditionally heart-wrenching) penchant for sustained moods of deep sadness into a new area redolent more of a by turns muzzy and metallic unhappiness. He should have called one of these albums Kind of Grim. And mere unhappiness, elaborated at whatever electro-technocratic prolixity, is not nearly the same as anguish.

Much of Miles’ finest music, from Blue Moods to “Prayer” on Porgy and Bess to Sketches to My Funny Valentine, has been about inner pain translated into a deep mourning poetry so intense and distilled that there have been times when I (and others have reported similar reactions) have been almost literally unable to take it. I have always been offended when people ask me to take off any jazz record because they find it “depressing,” but secretly I always knew what they meant. Because there were times when I found Miles’ anguish not purgative but depressing, when I had to yank Jack Johnson out of the 8-track deck because I could not drive to the laundromat with such a weight on my heart; but I also knew the reason why I (and, if I may be presumptuous, the nebulous anti-jazz people I just mentioned) was depressed: because at that moment there was something wrong with me, of a severity that could reach by degrees from my consciousness to my heart to my soul; because I was sweeping some deep latent anguish under the emotional carpet, or not confronting myself on some primal level – and Miles cut through to that level. His music was that powerful: it exposed me to myself, to my own falsity, to my own cowardice in the face of dread of staved-off pain. Because make no mistake, Miles understands pain – and he will pry it out of your soul’s very core when he hits his supreme note and you happen, coincidentally, to be a bit of an open emotional wound at that moment yourself. It is this gift for open-heart surgery that makes him the supreme artist that he is. So, obviously, I am damned if I am going to shrug him off at this point. I am going to tear these fucking records apart and find out what the source of the cancer running through them is, praying for cure.

"For me, I'll stake ten years of writing about this shit on Blank Generation and Metal Box. And On the Corner and Get Up With It by Miles Davis, which got kudos from jazz critics who never listened to them again and were rejected by the fans. The reason is the same: this is negative music, in all cases this is bleak music, this is music from the other side of something I feel but I don't want to cross, but if you feel the same then perhaps at least you can affirm this music, which knows that there is nothing that can be affirmed till almost... everything has been denied."

update: here's the whole of "Kind of Grim" which was actually published in NME posthumously in 1983 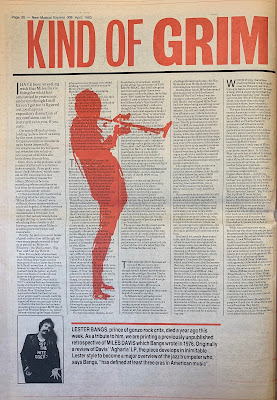 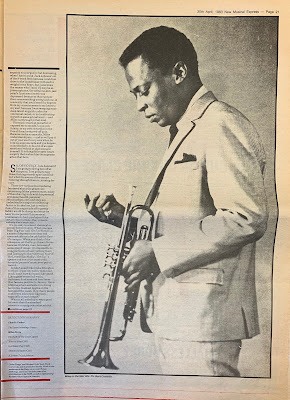 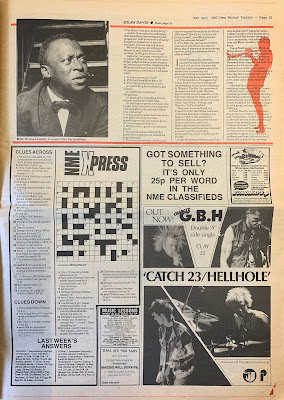 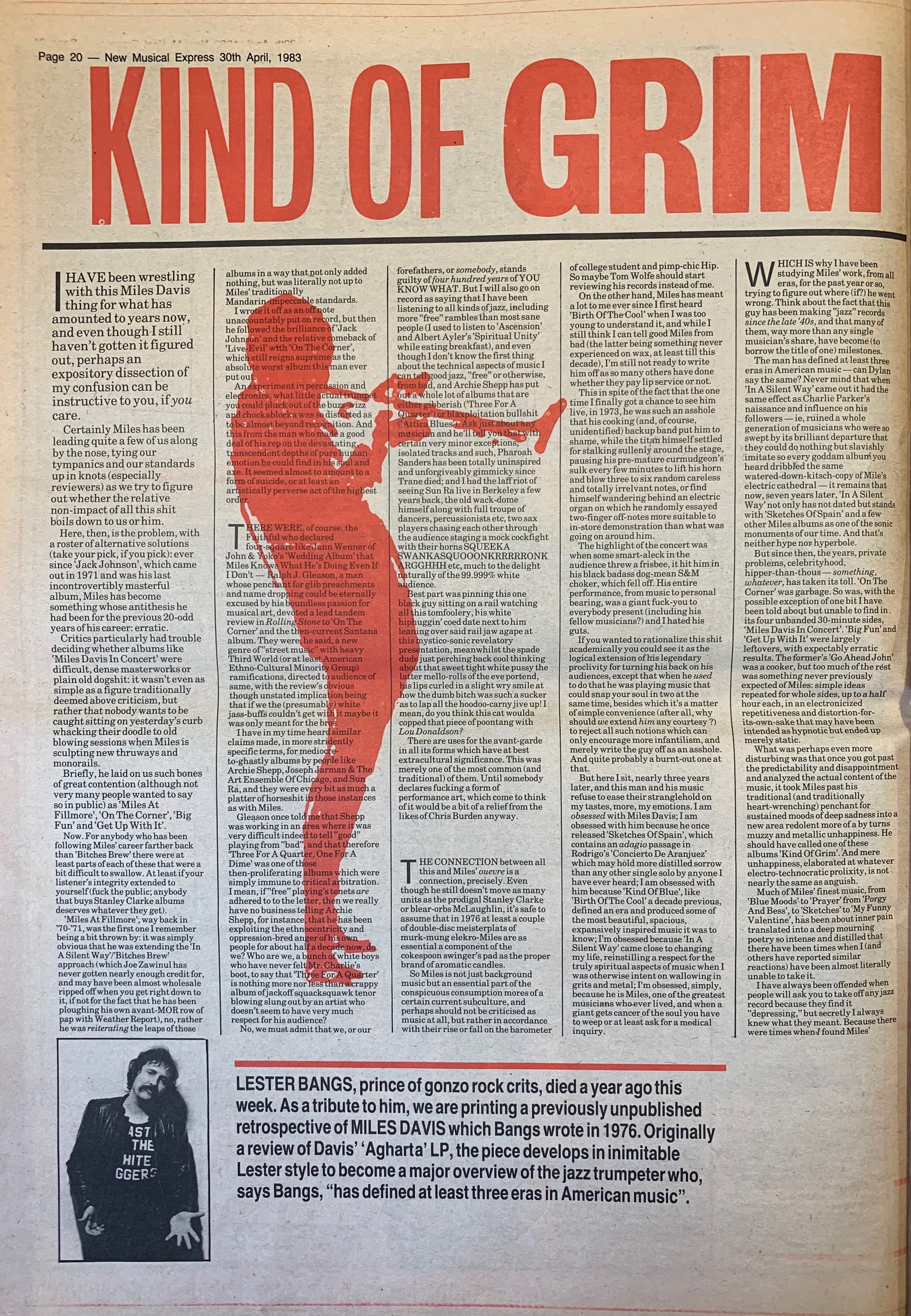 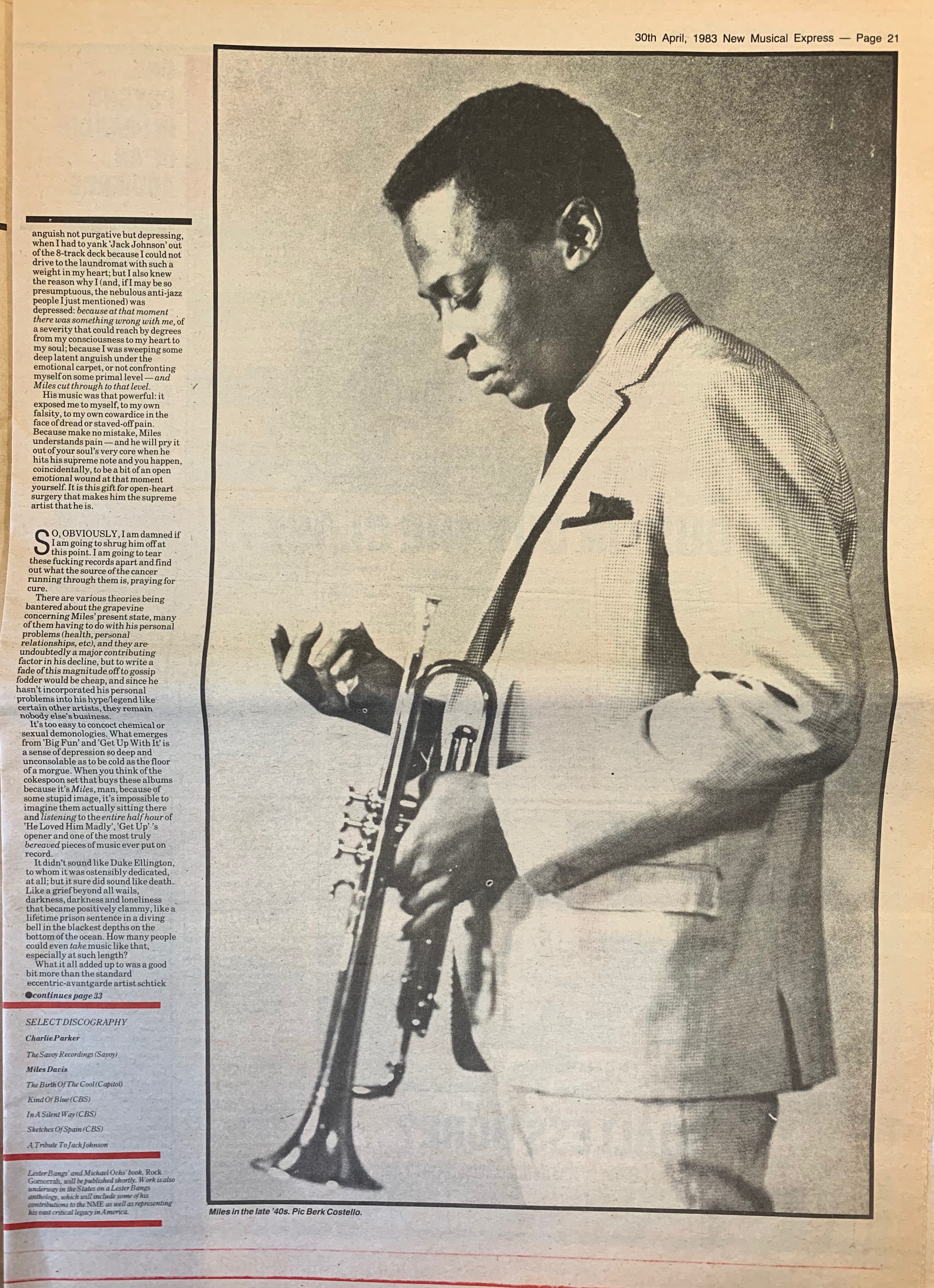 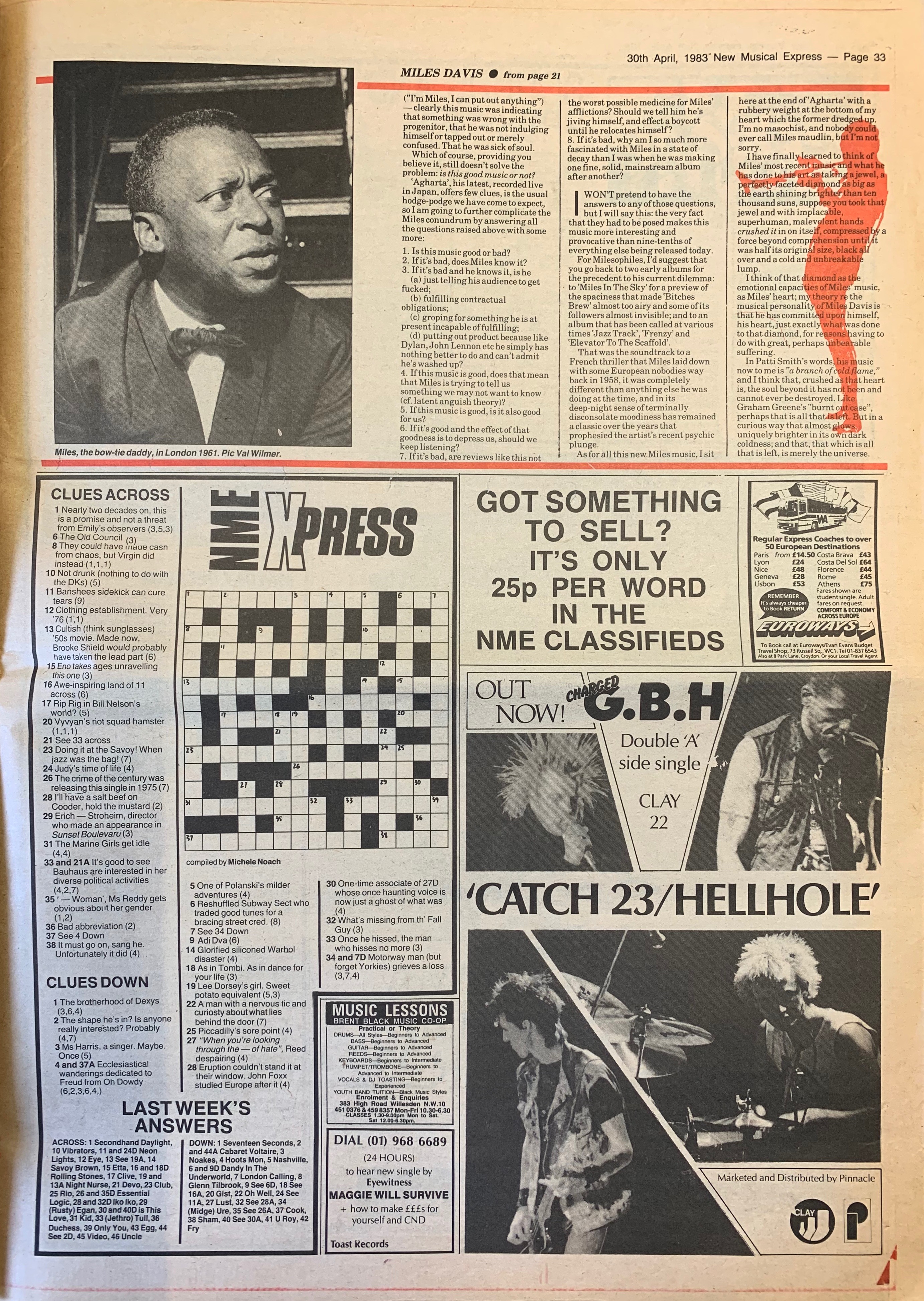 Posted by SIMON REYNOLDS at 3:56 PM